Dinner in the Nissan hut.

After a most enjoyable 5 weeks on board The Johan Van Oldenbarnevelt since leaving Rotterdam, I finally disembarked at the Sydney’s Circular quay side back in 1956. My first milk shake at the Spiro’s milk bar in George Street and a look at St Mary’s cathedral is what I still remember. However, more etched into my mind is what followed then.

It was sometime in the afternoon when those destined for Scheyville migrant camp were asked to assemble at the quay side. Our luggage would follow the bus in trucks. Of course, no one knew where that camp was situated. Somewhere in Sydney is what we were told. The bus was thus loaded with lots of shut jaw clamped migrants. We would finally face the reality of what our parents had undertaken.  Some of them we befriended during the boat trip over, including a family of Dutch Indonesian born. They were content to be just in a warmer place regardless of anything else!

I was just happy to look out of the bus window and more than curious what Australia and the sub-tropics were all about. I noticed first of all a kind of architectural chaos with many advertising hoardings and scrambles of signs vying for attention. This was (and still is) Parramatta Rd in full glory.

Being February and hot, I noticed after about ‘n hour’s drive or so, that the bus stopped and driver got out but we were staying put. It took some time and after lots of sweating that the driver got back in and we continued. It was well after arrival, a few days later, that we heard that the driver had got a ‘couple’ from the Locomotive Hotel at Homebush. I believe this pub is now a Pizza Franchise. 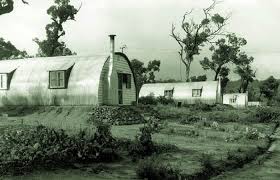 Our arrival at Scheyville was surprising. My mother first thought that those Nissan Huts were for the push bikes. I was more circumspect as I noticed beds with mattresses and, when I opened a drawer it had crusts of bread in it.  The afternoon heat and the long drive did not lessen my or my brothers enthusiasm for exploring the surroundings. The camp was surrounded by water as heavy monsoonal rains had fallen nonstop the previous few days. In no time were our shoes muddy. My dad in his Dutch mind set could not accept at once the extraordinary changes overwhelming him. The mud on shoes was so foreign and frightening… It was all happening too fast and he could simply not absorb this slip in order and neatness. He gave us a good smack.

Me and my brothers took it all in our stride and had our youth to back up any strangeness. In fact, it was this foreignness that excited us most. Fancy, on the next day excursion finding trees with orange coloured fruit on them.  We climbed the fence and pinched some but they were unripe so we chucked them feeling like millionaires.

My parents had a job adjusting to the Nissan huts, the general squalor with meals eaten in communal areas on timber benches. The camp seemed to be managed by Australians but the workers such as cooks, cleaning and kitchen staff were refugees from Poland, Hungary and Russia. In those communal eating areas, huge steel tins of chunky melon and pineapple jam were on wooden tables with pre-sliced white bread. Plates were laden with steaming slices of lamb and rich gravy, endless supplies of peas and carrots. Second helpings as well.

Australia was the ‘promised ‘land” after all.