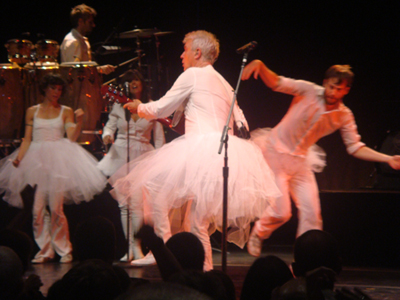 Thought to be an exposure of Hung with Tutu’s support *

The Crickmanistani’s have a droid with them that was a coffee dispenser on one of the levels of the Death Ball. Well anyway, this droid got friendly with, I mean really friendly with if you know what I mean, one of the design droids on board and has a copy of plans of the Death Ball. Well Helvi analysed them to find that there is a weak spot in the design in a location called the Upper Inner Thigh, apparently very tender and painful if struck.

So here’s the plan. Me and Helvi are going to teleport into the control room and take out the Detractor beam while Belinda and George hit the Upper Inner Thigh with a “Bouncer” which is a bomb. So we break the beam, get the zark outta there and blow the Death Ball up. Yeah, I know weak as but worked for George Lucas.

Belinda and George jettison themselves in an Escape pod just before we dock. Don’t ya just love how spaceships that travel in deep space always have escape pods, I mean where ya gonna go? Helvi and I beam ourselves into the control room. In a split second Helvi takes out two guards and the control door with laser canon fire, gees, no wonder Gez eats all his veggies. We roll behind a bank of computers and let the return fire go over our heads. My beautiful creams are turning beige to honey colour at the moments and I think the nanobots are struggling to keep up.

Helvi pops her head round the corner and with two shots takes out another two guards. There’s three left plus, you guessed it, the evil Lord Deaf Vision. Laser cannon fire is rapidly being deployed in our direction. With that Helvi winks and dives across the floor rolling and firing in the one action, I mean man, she is poetry in motion. Helvi takes a hit and has her arm blown off but momentarily she keeps firing.

Suddenly it’s quiet. A voice calls out “Sandy, just you and me now, come on out and lets fight to the death.” “Sorry” I reply meekly “I’ve got a bit of a cold and I don’t feel very well at the moment, how bout a rain-check?” Zeus! Where that came from I have no idea. “Come out Sandy, it’s time to be a man and fight, swords, to the death, just me and you. If you win you get to leave otherwise your ship and crew are mine.”

I stand up and see Lord Vision standing there, resplendent in his black armour and helmet. “Ur, um sorry old boy, but I don’t have a sword” and just as those stupid words fall out of my mouth Vision throws me a sword. “Take guard” he cries and charges at me with incredible power and speed knocking me to the ground. Luckily I used to watch Errol Flynn as a youngster and I just put my sword up in time. Just then my phone rings, I mean mobiles are a pain aren’t they, always ringing when its inconvenient.

I pull the phone out of my pocket and answer “Hello, Sandy speaking” I respond rather nonchalantly.

“It’s Gordon here Sandy. I’m in the pub with Emmjay and the boys and me what to see how you are getting on?” Gordon asks

“Well Gordon, I’m a bit busy at the moment. Lord Vision and I are having a sword fight to the death and right now he’s lying on top of me trying to cut my throat.” I inform.

“Sandy, you joker, look Algernon wants to talk to you”

“Hey Sandy, get back to Earth by New Years eve man, the bus is booked to the holy grail, and we need a priest to bless the pitch and then to absolve us of all our sins on the way home” says Algernon “Gez wants to say something”

“Hey Sandy, I made up a name for the AFL team in WA, The Fremantle Lamingtons, get it, funny eh” scoffs Gez.

“Can you put Gordon on I really have to go” I beg.

“Gordon here Sandy. Look to really piss Vision off just use the farce. Think of the stupidest joke you ever heard and throw him across the room. See ya”

Hmmm, stupid joke, I know, Horse walks into a bar and barman says Why the long face? I mean as if a horse would understand English, and what’s he doing in a bar anyway and what if the horse isn’t over 18? Go away Vision. And with that Lord Vision is hurled across the room smashing into a computer terminal and impaling himself on his sword. I go up to him. He’s breathing hard. “Sandy take my helmet off, I’m dying and I want you to know me before I die.” I unscrew the helmet. “Dad?”, “Sandy”, “Dad?” “Yes Sandy it’s me John.” Vision reveals. “But you’re dead” I assert. “No son, I faked my death to become an intergalactic umpire with the ICCB. Now look I’m dying there must be many questions you want to ask me?” Vision says. “Well, remember when I was 9 and all I wanted was a guitar and you got me Understanding Chaos Theory, why did you do that? And then when I was 13 I wanted a 7’6”Gordon and Smith surfboard and you got me Quantum Mechanics for Beginners, why was that?” “Yes, yes, parenting’s a tough gig, but Sandy don’t you want to know how to win at horse racing, predicting lotto and the truth about Gordon?” bleats Vision with one final breath. “No not really…..”

And there ends the first part of The Father O’Way Chronicles. The next part will probably be called “The Umpire Raises His Finger” followed by “The Return of the Ball” if you get my drift and of course it will totally meaningless as usual.

* This photograph will have a strange resonance for those who went to the David Byrne concerts recently.

** I would like to express my great appreciation for Hung’s masterful chronicles, and Warrigal’s digital wizardry – together making Father O’Way live, breathe and generally piss fart around !  Good on you !