Rendered into prose by 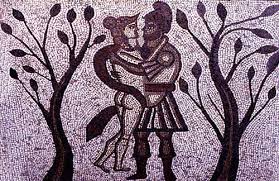 Meanwhile Aeneas lay awake in the dark of the night, unable to sleep for his burden of care. But when the sun rose, he too arose to survey the coast and the country near their landing site, anxious to learn more about the nature of the land in which they now found themselves. The region seemed wild and uncultivated, but they did not know whether the land was inhabited by men or solely by beasts.

He hid his fleet underneath a rocky overhang, above which grew tall trees which covered the mountainside and provided a safe retreat. Arming himself with two pointed darts and with the faithful Achates at his side, he left his friends, and when they had reached the deep recesses of the woods, all of a sudden, his goddess mother stood before him, a huntress by habit and manner; her dress suggested a maiden but her air confessed a queen. Her skirt was bound up and her knees were bare; her hair was loose and windblown; her hand held a bow and a quiver hung at her back. She seemed like a virgin of the Spartan blood: With such an array as this Harpalyce bestrode her Thracian courser and outstripped the rapid flood.

“Ho, strangers!” she addressed them, “Have you seen one of my sisters, dressed like myself? I think she wandered into the forest; she had a quiver, painted with spots at her back and she wore a lynx’s hide, and in full cry pursued a long-tusked boar.”

Thus spoke Venus, and her son replied, “We have seen none of your sisters, o virgin; or whatever other title you may call yourself above that… Oh, you are fairer than any mortal woman; your voice and manner betray the celestial nature of your birth! At the very least you seem like one of the chaste goddess, Diana’s retinue… Hear my plea then and do not let a humble suppliant beg your help in vain; but tell me, a stranger long tossed on the tempestuous sea, what earth we tread and who commands this coast? And then wretched mortals shall call on your name and offer sacrificial victims at your altar.”

“I dare not assume the name of goddess,” she replied, “or claim celestial honors; Tyrian virgins carry bows and quivers and wear purple buskins on their feet… Know, gentle youth, that you are in the land of Libya; a people rude in peace and rough in war. The rising city, which can be seen from afar, is Carthage; a Tyrian colony. Phoenician Dido rules this growing state, who fled from Tyre to escape her brother’s hatred. Great were her wrongs and her story is full of fate, which I shall sum up in brief: Sichaeus, a man known for his wealth, and brother to the Tyrian king, was engaged to her but both brothers were struck with an equal dart.

Her father gave her to Pygmalion while she was still a spotless maid. Then Pygmalion, who condemned both divine and human laws, attempted to seize the Tyrian scepter; then strife ensued, caused by accursed gold… The king, blinded by his greed for his brothers’ wealth, by stealth slew him before the sacred altar, but for a long time concealed from her this cruel deed. Every day he framed some new pretense about his brother’s whereabouts to soothe his sister, and delude her mind.

At length, in the dead of night, the ghost of her unhappy lord appeared; the specter stared at her as he bared his bloody bosom and told her of his cruel fate at the altar. Then he warned the widow to take her household gods and flee to seek refuge in faraway places. Finally to support her on such a long voyage, he showed her where he had hidden his treasure. Thus admonished and seized with a mortal fear, the queen gathered companions from among all those who had cause to hate or fear the tyrant, to join her in her flight.

They found a fleet, ready rigged, which they seized, taking Pygmalion’s treasure with them. The vessels, thus heavily laden, put to sea, with fair winds and a woman to lead the way. I don’t know if the weather or Heaven’s fate drove them, but at last they landed, where from afar your eyes may view the turrets of new Carthage rise. They bought a space of ground, named Byrsa, after the bulls hide, which they first enclosed and walled… But where are you from? Where were you born, and what do you seek on our Libyan soil?”

To her, with sorrow streaming from his eyes, and sighing deeply, her son replied, “Had you the patience to hear, or I to tell, oh nymph, the tedious tale of our fate, I’d take you through such a train of woes that the day would be over before the tale was done! We come from Troy – have you heard of her? – from which we were expelled by force and have been driven by tempestuous storms on various seas…

At length we landed on your Libyan coast. My name is Aeneas; a name not unknown to fame while Fortune favored me. With pious care I rescued my household gods, the companions of our woes, from our enemies and set sail for Italy; and I am descended from the King of Heaven. With twenty ships I crossed the Phrygian sea; my mother goddess leading the way. Now only seven ships remain; preserved from the storms here within your harbor. Now I am an exile, unknown and in distress; barred from Europe and thrown out of Asia to wander the Libyan deserts alone.”

His tender parent could no longer bear to hear his tale and interrupted him, seeking to soothe his care, “Whoever you are, you are not unbeloved by Heaven, since your ships have been driven onto our friendly shore. Have courage, and leave the rest to the gods. Go to the queen and ask her for her help. Your scattered fleet is now safely gathered upon the shore; the winds have changed and your friends are free from danger, or I’ll renounce my skill in augury!

Do you see those twelve swans, flying in beautiful order? Not long ago they were chased by an eagle, who pursued their scattering throng through the clouds; now reunited and in good order, and with returning joy, they flap their wings and fly in circles as they skim the ground looking for a friendly stream. Thus it is with you and your ships; all you have to do is to follow this path before you… You can already see the town from here.”

Having said this, she turned to leave and, as she walked away, allowed him to see her graceful neck and disheveled hair, which flowed over her shoulders and reached the ground; scenting the air with ambrosia, and, letting down the train of her long gown, by her graceful walk revealed herself as the Queen of Love.

The prince pursued the parting deity, calling after her, “Where are you going? You are unkind and cruel to deceive your son with borrowed shapes and to shun his embrace… never to let me see you except thus in disguise and to speak to him not in your own language but in a foreign tongue!”

Thus he complained against the goddess, but he obeyed her commands and took the path she had indicated and marched, invisibly, for Venus had shrouded their persons with mist so that no-one would stay their passage or force them to tell where they were bound and what was their purpose. This done, the sublime goddess flew off to visit Paphos, her native land; where garlands, ever green and ever fair, are offered with vows and solemn prayers at a hundred altars in her temple wile a thousand bleeding hearts invoke her power.

The Trojans climbed the next hill and, looking down beheld the town. Now much closer, the prince beheld with wonder the stately towers where until recently had been nothing but huts and shepherd’s hovels. He viewed the gates and streets and from everywhere heard the noise of the busy marketplace; the toiling Tyrians calling to each other, exhorting each other to work.

Some extended the wall while others built the citadel; or dug, or pushed unwieldy stones along. Some chose a spot of ground for their dwelling place, which, once designed, they surrounded with ditches. Some ordained laws; and some attended the election of holy senates. Here some drew up designs while there others lay deep foundations for a theater. From mighty quarries, mighty columns were hewn for ornaments depicting scenes which expressed their future hopes.

All worked as busily as bees in the flowery plains, when winter is past and summer scarce begun. Some conduct the youths about the city, while some make wine, which sitll others dispense. Some wait at the gate to receive the harvest and relieve their friends of their golden burden. All, with united force, combined to drive the lazy drones from the laborious hive.

Stung with envy, they viewed each others’ deeds as the fragrant work proceeded diligently. “Thrice happy you, whose walls already rise!” Aeneas said as he viewed, with lifted eyes, their lofty towers; then, entering the gate, still concealed in prodigious clouds, he mixed, unnoticed, among the busy throng, as, borne by the tide, he passed unseen among them.