I was abused from an early age by having to eat lumpy porridge. It has left its mark and no psychologist or therapist has given me any insight into how this continues to shape me into the present dysfunctional personae, still grappling with life so fraught with fits of uncertainty as to its real meaning or purpose.(Phew)

The weeks just prior and after the end of WW 2, Holland was on its knees. Oats, Biscuits and Spam was fought over by people running towards the US, Canadian and English Lancaster bombers overhead, dropping food parcels. I remember my dad running on a field towards one and bringing home a huge metal box with rock hard but very nutritious English biscuits. The sky was dark with food being parachuted , raining down on Rotterdam. How glorious a liberation it was! Dancing in the streets. 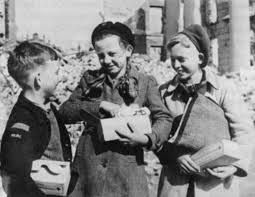 Despite the biscuits saving us from starvation, I still remember being very churlish about having to eat porridge with lumps and preferred the biscuits soaked in water. It was years later, when ‘easy oats’ came into being that could be cooked with milk without resulting in uneatable lumps. The porridge cooked by my mum then became silky smooth and with the Golden Syrup was delicious, a real delectable food. Even so, I have hardly touched porridge ever since. The lumps left their mark. That’s what a war does to you.

Walking around, pondering and practising a pensive thought or two is now a well earned pastime in advancing years together with offering adages and words probably so wasted on the much better informed. Together with Helvi and Milo, I traipse through our town forever hoping to find solutions to life and purpose. How this can be found by walking with a dog, hand-scooping his toilet habits in plastic bags, and drinking a latte in between is questionable but probably as good as studying Plato or taking Prozac.

But going back to lumpy porridge and hunger, we are surprised how much food can now be found just on the streets and parks. A half eaten hamburger here, bags of chips there. I sometimes, much to the horror of Helvi, lift a lid on public rubbish bins to see what has been discarded, much the same as I am curious about peoples washings on the line. Don’t ask, why? There is no hope. There is so much that can be gleaned from washing lines. Is the husband an office worker or tradesman? Are there children? How lithe and slim (or large) are they? What are the favourite colours etc. (Even that little joy is getting less with so many now lazy and using a cloth-drier).

But for discarded food…Only last week an entire ‘meat lover’s’ pizza in its specially designed aerated box was thrown out in the bin. Half full drink bottles, chips, steaks, even calamari rings, all gets thrown out.

It is nice to know that if ever I became destitute and homeless, food will not be a problem. I could probably make a living as well from sitting near a supermarket with Milo at my side, a cap with a few coins next to him and holding up a sign. “Help, I have still not found the purpose of life.”

There is hope where there is life!

6 thoughts on “Waste not want not. Just eat your lumpy porridge”