A hot day, but all is still fairly normal. 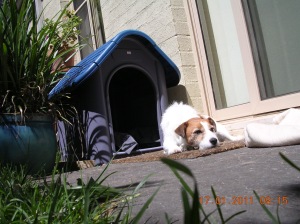 After emptying the contents of the shopping trolley into the boot I noticed the car’s outside temperature was 39C. We decided against walking Milo around. He was keen, but we were not. Instead took him with us in the car. We took his water dish and water bottle. Both are kept in his own little bag. We always tie him up in the shade with his water dish. Within minutes he gets surrounded by admirers who queue up to pet him.

Isle Nr 5 at Aldi in Bowral is the one that has the liquor license. That’s right, one can buy butter and Whisky all at the same counter, and at the same time, and from the same cash register and no questions asked. How we have progressed. I reckon, eventually all the registers will be so bold and allow the sale of alcohol. It just takes time. Easy does it, especially in Australia where you can sit in a train, have a nap and on awakening still see the same cows outside your window.

Since Milo’s limping with a possible tendon problem we have to lift him in the car. He now also doesn’t jump on his chair anymore. He is wise to his problem and knows his limits.  Soon after Milo’s trouble, I developed an excruciatingly painful back. We are now in a kind of symbiosis where before, one were the strong and large with the other being small and agile. I barely am capable of lifting Milo in the car. He is small but surprisingly heavy. I know how to lift him and even go through a preliminary exercise where I ,ever so gently tell him, ” wait a moment, just wait a moment”, before gently lifting him in the car’s back-seat. I bend my knees as advised by hospital’s doctor. He gave me very strong tablets and they do help but are addictive, so I only take them sparingly or not at all.  I don’t want to end up mugging old ladies while wearing a hoody, kicking them in the groin, and stealing their Panadol Forte.

Milo allows me to lift him in the car. He does look a bit embarrassed but what can you do? He refuses to let Helvi lift him and bites her instead. Not seriously, but he is letting her know he is not happy with her doing it. We find it hilarious. The reason is that Helvi is action woman. She grabs and just does it. A no nonsense woman. Milo always refuses to do anything he is asked. In fact, often does the opposite. That’s why he is so lovable. He doesn’t like being grabbed suddenly and from above,  probably thinks another dog is biting him.

I told Helvi to calmly approach Milo and stroke him a bit first, gently lift him whilst whispering soothing words in his small ears. “Get f*&cked,” she told both of us. I am rather chuffed Milo doesn’t bite me and prefers Helvi. And yet, it is Helvi who makes sure he gets everything he might possibly want and much  more. He gets his wants far in excess of his needs. No wonder the world is in disarray.

This post seems to lack cohesion. The binder of what makes things stick together has gone watery. It must be the heat. 41C now.

But apart from that the day is turning out ‘normal’.

4 thoughts on “A hot day, but still a normal day”