I read a lot of short stories from all over in an intense episode of study of the form and… adored … a hard back series of volumes, ‘the best of the year’ American short stories. Aside I enjoyed others. I discovered a voice in them that communicated to me a depth of humour and drama, but an urban rhythm and culture I somehow knew. Who knows how. Stories told to me as a child in the 50s of the American ‘occupation’ of northern Australia during the final days of WWII, American movies, popular culture, a professor at University, American friends.

I’ve only just this evening watched the movie ‘Factotum’ based on the novel written by Charles Bukowski. 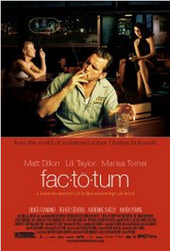 I was spell bound. I enjoyed the production design and as for the lead role played by Matt Dillon it is a voice captured. As if I was reading him off the page.  Its the personification of an American 20th century writer living on the skids of his dream, its rhythm hypnotic. I get the story. He skid rows from one place of urban employment to the next in shitty job after shitty job, chain smoking but it’s about so much more. About humanity, love, sex, hate, the movie filled me with hope for my own humanity, that it continues to prosper and my personal success day to day, week to week in the smallest and more significant ways, writing ‘stuff’ as I do from time to time, growing a garden, seeking a living by it if only by provision of a meal and a communal lifestyle attracting like-minded people, having worked enough shitty jobs, lived enough shit experience.

Whatever. Its inspiring to watch an actor (Dillon) transform a story of happenstance and a role into a work of creative genius. See the best.

It really got me out of a tinge of the doldrums caused by having picked up a glossy brand spanking new its skin paperback collection of an Australian sports commentator’s yarns off a neighbour’s kitchen table only a few days ago … such purest chance I saw it … and read a snippet why he had doubts, but included in his

volume the Frog Joke he described as “a radio joke”.  The bit that first threw me was his native honesty he did not say he wrote it.  I recognised in the same moment implication left so wide open that he did, any undiscerning reader may think he said he did.

including as a copy writer, to demonstrate ‘an ear worm’, as a simple exercise in a period when it was in fact a job of mine among many I took on to write and teach, facilitate a group of fledgling writers.

Our sportscaster in his introduction of it makes a comment that I’ve made independently, many times, that he could never understand its success.

How might he imagine I feel, how unimaginable the incredibly and entirely ridiculous Frog Joke was told mostly unchanged the world over and at one time in so many different forms, by children and adults alike, play acted, brilliantly adapted, used and sold over and over in one anthology after the next and the next.

I was working in one shitty job or another, gripping from toehold to toehold onto the surface of the earth, oblivious to it. There was even a brilliant animation

decrying how silly it was. I felt it as a great pity the video was withdrawn from circulation no questions asked and its creators it seemed ran away for perhaps fear of a reprisal when I contacted them.

The twist towards the end of ‘Factotum’ is his mail is intercepted, an acceptance of a short story letter opened and read, set aside. We don’t have it confirmed by the movie, but it seemed likely a long time might elapse before he would stumble on realising he made it as the writer nobody believed he was or could be.

Revealing that doesn’t spoil the movie and the declarative speech that is the punchline. Better see it if you haven’t.

Best is I was across it, moved, inspired by ‘Factotum’. I understand his chaotic life.