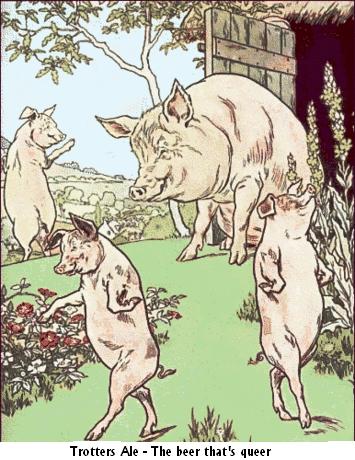 The Pigs Arms offers a unique experience with beer drinking. Brewed on the premises by the owner/publican “Merv”, Trotters Ale is a life changing experience.

I meet Merv who is a tall thin man with a pot belly wearing pink shorts and a t-shirt with “I didn’t see YOU in Vietnam 73” emblazoned on the front. Merv had black boots on with the words “Manne 1” on the right and “Manne 2” on the left written in white-out across the toes, how strange? Merv tells me Manne likes to have a kick around sometimes. On his arm he has a tattoo, a heart with the words “I love Blenda” curved around one side, when pressed Merv tells me he was dating Belinda but half way through getting the tattoo Belinda broke it off, so he started dating Glenda, “Had to have something there” he says. Some patrons are sitting in the courtyard around a wood oven, Merv informs me that they’re the “unleashed” and assures me they will speak about Trotters Ale.

A sign hangs over the bar that reads “If you order Trotters Ale leave your health insurance details with the barmaid”. I’m both puzzled and nervous. Belinda, the barmaid, pulls two glasses. She’s wearing a soggy sombrero and looks nervously at the window. The beer itself has a red glow and is served cold in a curvilinear glass. It has a small but notable vapour. My heart is racing. The glass is saying “drink me, drink me”. The ale has a unique aroma that is a cross between dead fish and the durian fruit. I take a deep sip. My mouth wants to cave in. In my head I hear a piercing scream of some wild creature in pain.

The mouthfeel is somewhat chewy and I was unsure as to whether I would live or die. I smile feebly however Merv is looking at me, grinning, “Bootiful idn’t it”. I try to drink more to impress Merv, I mean I’ve sampled thousands of beers this one wasn’t going to beat me. I feel as though some form of exchange is happening between me and the beer and Merv orders some wedges. Flashes of colour seem to be bouncing off the walls and the floor starts to shift. The wedges arrive and I eat some. “Their granny’s hot chilli” I’m told. My chest is pounding now and waves of nausea are crashing over me. I’m swallowing the beer like nothing on earth. More wedges, yes more wedges. The nausea starts to recede and my heart rate slows, the room returns to focus and I’m finished my drink. I’m starting to feel better but I’m incapable of speech. My lips move and the words “My round” stroll out of my mouth and across the bar and into Belinda’s ear. Two more beers are poured and we consume more wedges.

I’m feeling really good now, yeah, this is good beer. A peculiar smile appears on Merv’s face and he shows me into the courtyard where the “unleashed” are eating mushroom pizza’s and wedges. “This is Vic” Merv says “He wants to talk about Trotters”. I ask the group about what they think of Trotters Ale. A man called Emmjay says “Look old chap, the by-product of maltose, sacchyomyces and H2O is always welcome in my digestive tract”, hmmm, a scientist. The man next to him called Hung, thrusts out his glass and pleads “More?” Another, Warrigal, tells me “The’ beers are goo man, weawy goo”. The comments are coming now, the unleashed are off the hook. “Beware the DNA of Medea”, says atomou as his voice evaporates and his eyes narrow, “It’s okay but its not shiraz, anyone seen my chasseur? From Doncherry you know, cost a fortune” declares Gez, “You don’t think a stunning looking woman like me would drink beer do you?” replies Helvi, “I’m too busy cleaning up shit from child care” utters Glenda, “I think it illustrates that Lenin had a point in delivering the Goelro plan as part of the communist manifesto” states Voice. A voluptuous looking woman enters and sits next to Hung, it’s Tutu “Pink drinks for me, although since Merv has started putting tomato juice in the brew it’s good on a hot day”, tomato juice in beer, surely no one puts tomato juice in beer! The last one in the group is Jayell. I ask him about Trotter’s, “Well Yes, what a Wag, nah, not for me”

My phone rings, it’s Danny, “Hey Vic, I got you that ute”, ah yes Trotters Ale, very queer indeed. In the background I hear the faint sound of a guitar and a tune floats across the air just like rocks don’t, “Ay, Ay, Ay, Ay , Si, Si, Signora , My sister Belinda She pissed out her window on top of my new sombrero”