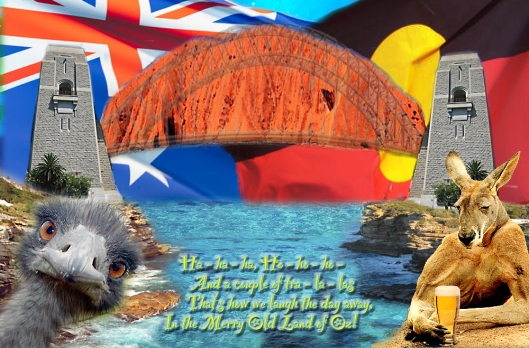 I was reflecting on the arrival, yet again, of Australia Day.  And I was as usually troubled by the realisation that Australia came into being on 1 January 1901 – but that day off was taken by New Year’s Day – so we adopted plan B – the day Arthur Phillip in 1788 stepped ashore at Botany Bay – and raised the Union Jack on land claimed for England by James Cook on 22 August 1770 – the Eastern bit of the largest island.  Moreover it wasn’t until the 1930s that we bothered to celebrate the day at all – and not until the nineties that we did it everywhere at once on the wide brown lounge.

But I doubt that little details like these really matter very much.  Every day in this wide brown land is Australia Day.  But sometimes we have to work and sometimes we get the day off to do what Australians by and large do.  Which is two-thirds of bugger all.

So, reflecting that a story about two-thirds of bugger-all is not very compelling, my first reaction was to shoot for three-thirds of bugger all and ring up Foodge – to see what he’s been up to, but his one-time fiancée and part-time receptionist told me that the last time he was in the office was before Christmas – and that she suspected that he’d had a “holiday” with a blonde woman that he was supposed to meet a few weeks ago after some of the patrons of the Pig’s Arms overheard him making an “appointment” with her shortly before he was driven off by Inspector Rouge and Constable Jail. (Record length for a Pig’s Arms sentence – challenging the attention span of many Pig’s Arms patrons).

Drawing nothing but a blank on the Foodge front, I resorted (shamefully) to catch up on the news.  Like many of the Pig’s patrons, I can’t abide commercial media, so I opted for the ABC – and was refreshed by hearing that Adam Gilchrist had taken his job as the elder statesman of keeping a huge leap forward by stating the bleeding obvious and complaining that Australia has become a nation of sheep (falling in line with the Kiwis, one supposes) and of mindlessly worshipping celebrities for the fame rather than their substance.  Admitting that being the keeper of the Australian red ball game apparently IS a thing of substance, it was refreshing to have the point of view delivered by such a nice bloke.  An essentially decent, good bloke.  An Aussie good fella.  Our good mate.

I was also thrilled to see the redoubtable ABC back up Gilly by letting us in on the vital information that an A-league player faces trial on a sex charge, a rival threatens Jessica Watson’s ‘round the world solo bid, and a soap star admits a cocaine charge.  I think there’s some self-congratulatory movie awards stuff going on too, but in the spirit of Australia Day, if not exactly echoing Gilly’s sentiments, I’ve decided to ignore it on the grounds that to be truly Australian, it is important to not give a shit.

This is Australia.  It’s our day.  It proves that we are as we always have been – as Barry Humphries once famously described (was it Melbourne ? – It could have been the whole country) – the arsehole of the world.  With paradoxically one of the highest standards of living according to our accumulation of pointless consumer goods, an albeit fraying tolerance if an not acceptance of people from other nations, a hostile climate, a nation governed into the ground, whipped by the massive storms of international finance, punching above our weight and kidding ourselves that we amount to something more than Bogart’s hill of beans.

The appropriate way to celebrate our great nation is of course to gather around the barbie and whinge about the day falling on a Tuesday and having to come to work on the Monday before – or taking (gasp !) one of our boundless days of annual holidays – to make it a four day weekend.  And lament the disappearance and near extinction of the Aussie tennis star.

Geez, talk about primitives.  I’m off to try and catch up with hot gossip from Hollywood.