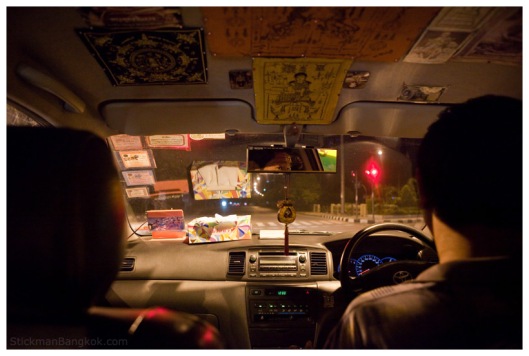 When we are young, one of the first lessons we learn is not to get into cars with strangers. It goes along with don’t take lollies from strangers and look both ways before crossing the road.

When we grow up, that first lesson becomes less important as we jump into cabs and onto buses on an almost daily basis, assuming we will arrive at our intended destination safely, free to carry on our business for the day.

Perhaps though we should take more heed of that primal safety lesson, especially in foreign places. As travellers and tourists we climb into cars trusting these strangers will take us where we ask even though we have no idea where that is.

Imagine being in a foreign city where you don’t speak the language. You’ve just managed to make the cabbie understand where you want to go and have perhaps agreed a price.

You buckle-up (if you have that luxury) and watch out the window as the car veers around corners, up streets and down a dark alley. Is that alley a shortcut or are you being taken in some kind of ritual kidnapping of tourists about to lose all your possessions and left only with your underwear?

Of course when you ask any questions, the cabbie’s limited vocabulary, has suddenly disappeared altogether, just as you might soon as well.

But usually you arrive safely and live to tell the tale of the “scenic” journey you took and the exorbitant amount of money you paid for it; again the driver’s vocabulary disappeared when you tried to negotiate on the rate.

We all so freely place our trust in hundreds of strangers in our everyday lives and often where are personal safety is involved – hairdressers, dentists, doctors and the list goes on.

A recent study out of the University of British Columbia in Canada explains that “large-scale societies in which strangers regularly engage in mutually beneficial transactions are puzzling”.

Yet behavioural experiments show that members of these societies continue to interact in “fair, trusting and cooperative behaviour”.

Looking at the taxi-ride, it is technically a mutually beneficial; you get to where you want (you hope) and the driver receives payment (sometimes more than you would like). So we place our trust in the taxi driver and assume we will be a) alive at the end of the trip and b) in the place we wanted to go.

Is that trust however somewhat mis-guided?

Obviously unless we hire our own mode of transport we must rely on strangers. But in countries with rather lax road rules it is more than just the “scenic” route that can be a problem

Our driver was attempting to break the land-speed record and was only thwarted by a few stubborn drivers refusing to move to the left-hand lane despite our driver’s furious light flashing. Most other drivers had enough sense to dart out of the way at the sight of our van looming in their rear-view mirrors

The swerving skills of our driver were excellent. Left then right with pure precision, he even considered using the right-hand shoulder to overtake a couple of times and only once sent our van head-long towards the concrete barrier in the middle road.

Our record attempting journey was halted only by the gridlock of Bangkok’s traffic where we did arrive safely, albeit with a few internal organs dislodged and some frayed nerves

The locals in the van never once seemed concerned, so it was obviously a common manner of driving in Thailand. Which means perhaps our trust in this particular driver was well placed. If the locals had been concerned, as they were on a mountain taxi ride in Morocco where it seemed certain we were going to park the rickety old Mercedes at the bottom of a 400m ravine, it would have been a different story.

So perhaps it’s not the echoes of our parents words “never get in a car with a stranger” we need to follow, but instead the locals. If they seem comfortable, then relax and trust you’ll be okay. If they’re worried, then it may be time to grab a pen and paper and write your will.

6 thoughts on “Riding in Cars with Strangers”