There must have been some spare money about but when about twelve or so I had a Kodak box camera given by my parents. It was a simple box and had two little mirrors in which to focus on the subject. The film was wound on an empty spool two and a half times and then inserted in the camera; the box would be closed ready for the 8 or 12 photos that it then could take. What a glorious gift it was. The photos took about a week to get developed and sleepless nights would be followed by euphoria when the big day would arrive to get the photos. Money for the development was earned by collecting old newspapers and rags after school.

After the go-a-head for migrating I had spotted a camera far advanced to the Kodak Box. It was an Agfa Clack. Forty five guilders.  A small fortune. Many times I stared at the shop window.  As I remember, it had two apertures and two shutter speeds and was flash capable. The approval to migrate coincided with parents taking me out of school in order to work to help and fatten the communal Oosterman wallet. Something at least for the totally unforseen and unfathomable future. 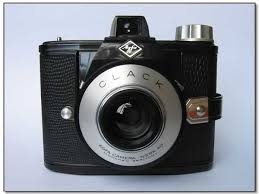 It was all a bit shaky and nervous during that time. Friends would be left. No more handball games on a Sunday with girls and budding breasts…. Eric Nanning, Anton Van Uden, Louis Gothe, all would disappear within a few months. The same for our street, the ice cream (between crusty wafers) shop, and hot ‘patat de frites’ as well, soon be gone. What need for a good camera, etched the good times in photos’ eh?

The job was delivering fresh fruit and vegetables to the very top of The Hague’s society and its burgers, Including royalty and most embassies. The delivery was done by carrying the goods in a huge wicker basket fastened above the front wheel of a sturdy and large steel framed bicycle.  I peddled like one possessed. There were lots of orders and the boss was strict. No loafing and it was winter.

The stingiest of tippers are The Hague’s wealthiest, the best tippers the staff of embassies. They all had jars of money to be tipped to deliverers of goods. The US embassy was unbelievably generous. My earnings were always tipped into the parental wallet, ‘for our future,’ I kept being assured. All tips were mine and at times they eclipsed earnings, especially after a delivery of imported black grapes to the Yank kitchen at the back of the Embassy, the tradesman entry… A ten guilder tip gave me almost a quarter of the Agfa Clack in one scoop. Not bad, considering I had filched a couple of those grapes from the delivery. Geez, they were those black ones as well.

I soon came to that glorious walk to the camera shop and bought my camera. A couple of weeks later, a leather case with carry strap. Soon after that a battery operated flash with 6 globes. Even sooner came the day, just after Christmas on a bleak and rainy day that it came about, that we all walked the dreadful walk up the gangplank and boarded our ship to Australia. Goodbye all. And that was that. My Agfa around my neck.