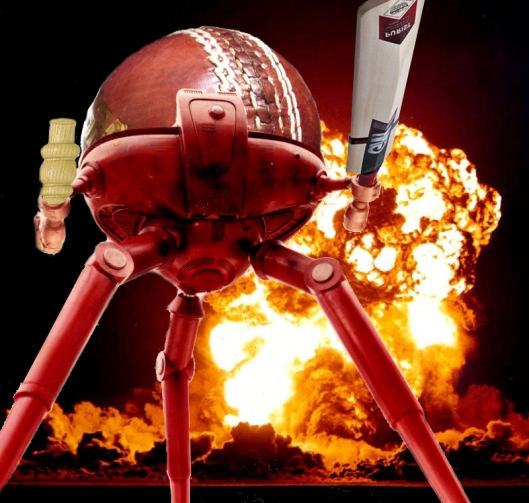 I have a meeting with Gordon about the mission. “So Gordon, more baked beans? And what about the ICCB (Intergalactic Cricket Control Board)?” I’m asking this from my previous encounter with the last experiment that I had unwittingly become part of.

“No beans this time Sandy and don’t worry about the ICCB since you knocked out both of their Death Balls you could say that they’re neutered.”

“So Gordon are you saying that the ICCB hasn’t got any balls?”

“Yes Sandy, the ICCB is ball – less however the Stumponians are well armed. Nothing the Helvi-tastic can’t handle and oh, yes, your farcical powers” says Gordon with that mischievous grin and a chuckle that freezes your blood.

“Reset the expiry date on the card and that’s it. Oh, and get the Holy Bail. Oh and get the cards back from those Haggin’s, oh and say gidday to Axelrod the Marauder. Hmm, I think that’s it. The navcom has been programmed, take the wavetable after Pluto” rambles Gordon.

“Who is Axelrod the Marauder?” I ask stupidly knowing it will be something horrible. I mean the name is a dead give away. Should I call myself Sandy the Nice Bloke, hmm, don’t think so.

“He’s the keeper of the Bails. You will have to fight him I suppose” Gordon answers rather nonchalantly. Gee great, thanks Gordon. This is a joke, a farce. Just as that thought pops into my head the glass of water on the table in front me smashes to smithereens, oh no, the farce.

“Yes Sandy you must use the farce, may the farce be with you”

“Go the farce has ended”

“Thanks be to Gordon”

I teleport aboard using my SPIT(Small Personal Interplanetary Teleporter) and meet up with the crew who are all in the local, The Bats Droppings, for a reunion drink. The navcom who we call Neville has come as his dog form but all the regulars are here. Michael the publican pours me a pint of Trotters. Al Foyle, the Garrison Commander is in deep discussion with Helvi, about killing Stumponians probably.

Dave the guitar droid is playing some Muddy Waters and George is betting on the dish lickers. Belinda grasps my arm “Strange being back in space Sandy, isn’t this exciting” Well, yes, no, maybe.

“Orbits a star called Aldebaran, only 65 light years away, shouldn’t take long” replies Belinda with the excitement rising in her voice. “And don’t worry, me and Helvi will deal with axle grease or what ever his name is. We are a bit of a team us two.” What’s this now, warrior droid plus warrior woman? Scary stuff.

Now let me tell you, space is big, I mean, it’s bigger than big, it’s huge. Isn’t it amazing, big and huge are such small words to describe such a big thing as space. Anyhoo the ships engine doesn’t have a known top speed. It just keeps accelerating till the navcom tells it to stop and so by the time I have finished writing this sentence I will be thousands of kilometres away from where I was when I started.

So the Stumponians, who are they? Belinda and I head to the Cruel Room to get briefed on who we are up against. Oh, the Cruel Room is a four dimensional multimedia centre where the walls and floor all go one colour, invisible. It makes you think you are sitting on the outside of the ship, the S.S Julian II, or the Jules for short.

Stumponians love balls we are told. Throughout their year they have Red Balls that last for five days and White Balls that just go for a day. And there’s a rumour going round that they are going to have a new ball that just lasts three hours or so, I mean can you believe that? I can’t and I’m the author. Imagine anything that goes for five days, boring.

There’s singing, dancing, classical music, fine food and wine and art displays. Apart from that they are highly militarised and love fighting. Strange hey. They protect The Stumps that holds the Holy Bail which belongs to Gordon.

“Look Belinda, there’s just one thing I’d like to know” I ask rather meekly.

“Well, you know in the earlier part of this story I found out that you weren’t my sister, thank Gordon, but the evil Lord Deaf Vision was my father. So am I going to find out that I’m related to a Stumponian or what, I mean my nerves are killing me?”

“Yes Sandy” Belinda informs “Alexrod is your brother who in a previous life went by the name, David”