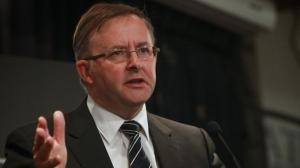 Today my grievance is against the Prime Minister (Mr Howard) for his failure to provide leadership. You can trim the eyebrows; you can cap the teeth; you can cut the hair; you can put on different glasses; you can give him a ewe’s milk facial, for all I care; but, to paraphrase a gritty Australian saying, ‘Same stuff, different bucket.’

In the pantheon of chinless blue bloods and suburban accountants that makes up the Australian Liberal Party,this bloke is truly one out of the box. You have to go back to Billy McMahon to find a Prime Minister who even approaches this one for petulance, pettiness and sheer grinding inadequacy. …

But the gulf, Mr Deputy Speaker, between the man in his mind – the phlegmatic, proud old English bulldog – the Winston of John Winston Howard – and the nervous, jerky, whiny apparition that we all see on the box every night. When he looks on the box he gets to see what we see – not the masterful orator of his mind but the whingey kid in his sandpit. Spare a thought for us, Mr Deputy Speaker, because we have to watch this performance every day – the chin and top lip jutting out in ‘full duck mode’. This prime ministership is not about the future of our nation. It is about John Winston Howard’s past. …

John Winston Howard grew up in the inner west of Sydney. His father owned a service station on the corner of the street where I now live. These were the halcyon days of little Winston’s life – when the working classes knew their place and when all migrants were British. Lucky John Winston Howard moved further north across the harbour. He certainly would not be comfortable living in the inner west of Sydney any more. A bit too much change for his lifetime.

John Howard has always been proud to call himself a conservative. The problem I think is that he has confused this with preservative. … Because it all started going wrong in the late 1960s. Here is a man who lived at home until he was 32. You can imagine what he was like. Here were young Australians demonstrating against the Vietnam War, listening to the Doors, driving their tie-dyed kombi vans, and what was John Howard doing? He was at home with mum, wearing his shorts and long white socks, listening to Pat Boone albums and waiting for the Saturday night church dance. Yes, it all started to go wrong back in the 1960s. Radical and sinister notions of equality for women, world peace and, dare I say it, citizenship rights for indigenous Australians.

So what do we hear when we listen to John Winston Howard today? We hear the hatred and resentment in his voice – the sort of hatred and resentment we saw at the reconciliation conference last year – hatred and resentment from a man who was never part of the scene, who was not accepted, for whom a different life was too big a leap and who took refuge in a previous generation. You can see it in his instinctive hatred of any progression, and he sees it everywhere – policies of social inclusion, multiculturalism, women’s liberation, Aboriginal reconciliation. In all of them he only ever sees the jump he was too weak to make decades ago.

Now he wants the whole nation to stay back and keep him company. Punch `Howard’ and `multiculturalism’ into the Hansard database. You will find he has never mentioned the word. … This is the man we have leading the country – a man who is so instinctively petty and so bitterly obsessed that he could craft an entire parliamentary career without mentioning the word `multiculturalism’ and what that represents, because it is an idea he is opposed to. He is positive]y Orwellian in his pettiness. This is a smallness of mind, a meanness with breathtaking scope.

It is a small thing really but remember when the Spice Girls came to Australia at the beginning of the year? … What did he say? He said it would not be ‘appropriate’ to meet with them. That is vintage John Winston Howard. If he really did not want to meet them he could have just said he was on holiday at Hawks Nest. But he could not resist. He could not resist telling the youth of Australia that he thought they were infantile and stupid and therefore it would be inappropriate to meet these people. …

Australia is a better country than that and Australians are better people than that. Australians are, if we are anything, a courageous people. So steeped in conservative values and fear of what is new is John Winston Howard that, if he were born before the Wright brothers, he would have organised a campaign against air travel of any description on the grounds that it was new and potentially dangerous. He is an antique, a remnant of the past that should be put on display, but not in government and certainly not in a leadership position, for anachronisms belong in museums and historical texts, not in parliament. Australians deserve a courageous leader; they do not deserve the kind of leader that used to dob on them in the schoolyard. They do not deserve John Winston Howard and in time they will put him out to pasture. Roll on that day, come the federal election.

17 thoughts on “The Brilliance of an ALP Orator”