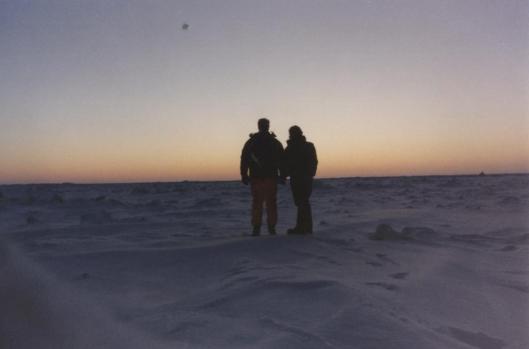 Story and Photographs by Neville Cole

I have managed to secure the services of a local Inuit guide, Akkikiktok, to help me on my expedition. He assures me he knows the way to Santa’s Workshop like the back of his hand and can get me there “no troubles.” He also tells me I made “the best choice for a guide in all of Barrow. Ask anyone,” he laughs with a broad single-toothed smile, “Akkikiktok mean ‘very cheap.’’ I have since confirmed on google that Akkikiktok is Inuit for “costs little” so at least he is a man of his word.

Venturing by snowmobile out into the dark, winter wilderness has me more than a little concerned; but Akkikiktok is supremely confident all will be well. “We just keep going due North two days, maybe three. Can’t miss it.” As we race across the frozen tundra I can hear him hollering a familiar refrain. 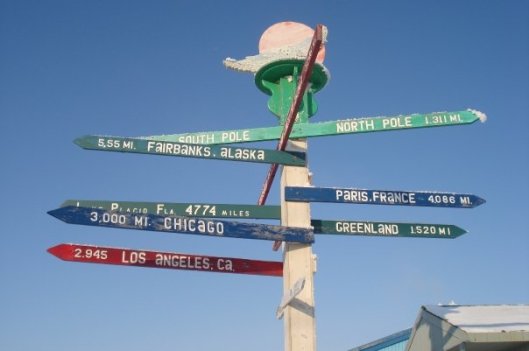 I have to admit I expected this night within the Arctic Circle mid-way between Barrow and Santa’s Workshop would be a lot more miserable but Akkikiktok’s seal skin tent is surprisingly comfortable. We travelled for probably 14 hours or more before Akkikiktok pulled over to set up camp. As there is no day this time of year, there is really no point in stopping out here until you are almost too tired to go on. Camp was pitched in no time flat and before I knew it we were both sitting down to a during a delightful meal of hot tea and cold muktuk (whale blubber). But it was the after dinner show that made the whole experience worthwhile. You have no truly lived until you have witnessed Aurora Borealis in all its wild glory.

Up here you don’t see Aurora Borealis, you are Aurora Borealis. The whole universe is alive and breathes pumping color and energy directly into your soul: somewhat like a standing alone in a silent trance party. No. Come to think about it. It’s better than that. It’s like a glow stick paradise at burning man north. No that does do it justice. Oh, to hell with it…trust me, you had to be there. 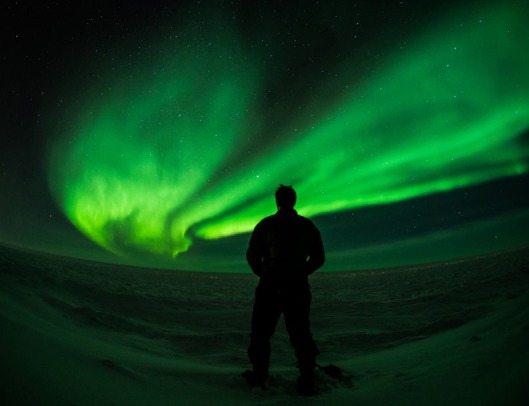 Those of you lacking any Christmas spirit have probably already checked the internet and noted that it would be plainly impossible anyone to ride a snow-mobile to the North Pole in “two, maybe three days” from Barrow, Alaska. This is quite true. Santa’s Workshop is not exactly at the North Pole. In truth, it used to be but what with satellite tracking and google maps they just started getting too many visitors at the old address and simply up and moved the whole operation one summer to a tiny, uncharted island in the middle of the Arctic Ocean: think of Gilligan’s Isle with snow and ice instead of sand and palm trees.

At first glance, Santa’s Workshop seemed smaller, more rundown and far less Christmassy than I imagined; but that was before Akikiktok and I made our way inside. When we did so, what I saw would have made Dickens himself retch with disgust. No happy holiday carols being sung with elfin glee. No bell laden reindeer prancing about in excited anticipation. No cherry-cheeked gentleman in a red fur gown making a list and checking it twice. No happiness at all. No sound at all. No body at all. Save one glum-looking little fellow in faded knickers and a flea-bitten old coat.

“Gipper!” Akkikiktok cried out as soon as the miserable old elf came into view. “I have brought you muktuk and vodka! And this guy who wants to interview you.”

“Interview me?” Gipper the elf sighed. “Whatever for? What a bore. Vodka sounds nice. I’ll end up on the floor, for sure!” Then he shuffled off into another room with so much as a “howdy do.”

“Akkikiktok?” I whispered suspiciously. “What is going on? What are we doing here? Where is Santa? Where are all the busy elves? Where are the blessed reindeer, for heavensake?”

“What?” Akkikiktok hollered. “What century do you think this is? Oh boy, wait till Gipper hears this.”

“Hears what?” says a tiny helium-like voice suddenly appearing out of the shadows.

“He wants to know where Santa and the reindeer and all the other elves are! That’s a good one, no?”

“Oh yeah,” Gipper mumbles morosely. “That is too funny for words.” 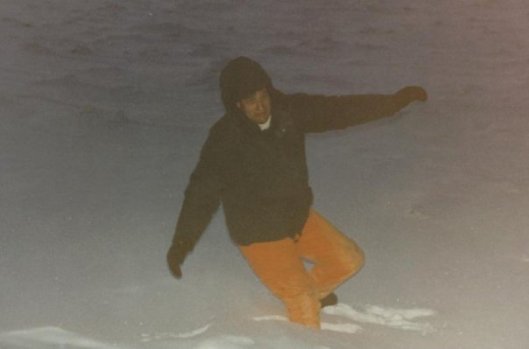 After another hearty bowl of muktuk (fried up this time in its own fat) and a glass or two of vodka, Akkikiktok and Gipper finally started to make some sense and I decided that this lonely, old elf was indeed a worthy interview subject. I wanted to know what was really going on. When did everything change? How is it that Christmas continues when the engine that drove it for some many years is gone? Fortunately, the alcohol loosened Gipper’s tongue, Akkikiktok’s giddy, child-like energy seemed to ignite his waving Christmas spirit, and before long the story of the last elf was told to us all by a comforting, crackling fire.

“You should have seen this place fifty, sixty years ago,” Gipper smiled, light from the flickering flames dancing across his eyes. “It was all you imagined it would be and more. I tell you no Hollywood movie ever could have done it justice.”

“So…” I said with all sincerity, “what happened?”

“Globalization, of course, Gipper said, throwing up his hands. “What else? Why would this place be any different to any other business anywhere in the world? In fact, it happened here first. This should have been the warning shot heard round the world. We simply couldn’t compete with those Chinese elves. We couldn’t match the customer support teams in India. We couldn’t match FedEx and Amazon’s delivery systems. By the mid-eighties the writing was on the wall. Most of the elves move on right away and got other jobs. Silicon Valley? That place was built by us elves! Only they got smart and called themselves nerds and nobody even noticed. Hell suddenly nerd was cool! Suddenly nerds ruled the world! I was a nerd revolution. Nerd revolution my foot! I’ll tell you what it was…it was an elf revolution plain and simple. I’ll tell you something else. No one codes like a Christmas freaking elf! Sure some of them went to China to run the factories there. Shoot 14 hours days is a picnic for Christmas elf and from what I hear the cost of living is cheap, cheap, cheap. But we held on here as long as we could until the big guy packed it in and moved to Key West.”

“The big guy?” I asked. “You mean Santa? Santa is living in Florida?”

“Yeah,” Gipper smiled wryly. “He and the missus moved down there in the early 90s… just like every other retiree with enough dough socked away to live the good life. I hear tell he and Mrs. Claus never miss a Fantasy Fest and one year he won the Hemingway Look-alike competition. Must be nice.”

“You mean to tell me you are the only elf lest in Santa’s Workshop?” I said, once all this finally sunk in. “What do you do all day? Up here alone.”

“I’m head of wooden toys.”Gipper answered. “Not a lot of call for wooden toys anymore; but if you buy a wooden toy one there’s a good chance I made it. I can make pretty much any damn thing out of wood in no time flat.” Got rooms full of them all over this place. Of course, thanks to a contractual obligation I got to stamp most of them “made in china.” I was grand-fathered into the ChinaToyCo agreement of 2001. Don’t get me started; but I ain’t gonna quit I’ll tell you that right now!”

Gipper was well into his third glass of vodka by now and his slurring more pronounced and his language more raunchy with every sip.

It was a long way back to Barrow and Akikiktok was anxious to move on before weather set in. As happy go lucky as Akikiktok is even he didn’ want to get stuck with cheery old Gipper for a week. I bought a wooden rocking reindeer for the nephew and we made our home. My you should have seen the Aurora Borealis show on the long ride home.

6 thoughts on “The Last Elf”