During his recent visit to Arizona – in which T-Rump miraculously managed to jam an audience of 15,000 rabid supporters into an auditorium with a seating capacity of 4,000 – the self-proclaimed greatest presidential candidate God ever created paid a quick visit to the Mexican border to round up some dangerous criminals, strike fear into the hearts of the Mexican government, and paint of vivid picture of T-Rump Immigration Policy.

T-Rump sat down with me briefly to discuss his vision before running off into the sunset to “kick some more Mexican ass before the day was done.”

Pig’ s Arms: Thank you Mr. T-Rump for taking time to speak with us today.

T-RUMP:  Call me Don! Or The Donald. Or Mr. President. Look! First and foremost let me say one very important thing. First I want to say that this has truly been a pleasure and an honor to be here today rounding up several hundred rapists and drug dealers that the government down in Mexico keeps trying to send up here to take over our great republic. If I could, and God’s knows how great I would be at it, if I could… I would spend from now until my inauguration patrolling this border from sea to shining sea with the possible exception of spending election night celebrating my victory at T-RUMP Resort and Casino in Atlantic City.

Pig’ s Arms: So, even after you are elected you would come back to patrol the border until the inauguration?

T-RUMP: Yes. See here’s the problem as it has been explained to me. The election don’t mean nothing right away. There’s supposedly this time after the election where everyone has to wait around for the paperwork to dry, or something. Which is one thing I am going to look at very carefully. I think the American people who will vote for me in historical numbers are going to want me to get to work right away. I don’t know why in this day and age we can’t have the vote and sign the paperwork that same day. I got the best paperwork people in the business. I do a deal with China we got the paperwork on the table ready to sign before they even know they want the deal.

Pig’ s Arms: Okay. Let’s jump to the day that… all the paperwork is done and President T-RUMP is in charge. What changes can people down here expect to see right away?

T-RUMP: Apart from streams of drug dealers, rapists and terrorists racing back across this border to get back to Mexico, you mean? I’m kidding, of course. That is going to happen as soon as I win the election. Once I am in truly in charge the real fun begins… I don’t want to let too much out of the bag just yet; but let me just say once people see my plans they are going to have to seriously look at changing the name of the so-called Great Wall of China ’cause that thing is going to look like a garden fence compared to the Greatest Wall of T-RUMP.

Pig’ s Arms: So it is true? You do plan to build an actual wall between the US and Mexico?

T-RUMP: I don’t know if “wall” is a good enough word for this thing I have planned. I got the idea watching Game of Thrones. You see, right now, the Mexicans are pretty much wildlings; but believe me, there are White Walkers right behind them. Well, not White Walkers exactly… more like Brown Walkers. Anyways, I’ve said it before and I’ll say it again:

I will build the best wall, the biggest, the strongest, not penetrable, they won’t be crawling over it, like giving it a little jump and they’re over the wall, it costs us trillions.*

Pig’ s Arms: Speaking of cost, do you still intend to make the Mexico pay for the wall?

T-RUMP: This is what politicians and laymen and pretty much all chicks don’t get. They don’t get how business works. Let me explain it to you:

Any savvy real estate mogul will tell you, is how it works. You build a big expensive thing and then hand someone the tab and they have to pay it. It’s the law.**

But, I’m not stopping with a Mexican wall. ‘Cause you know and I know that once we stop them coming in from down south they will find their way up north and start streaming in from Canada, so we are building a Canada wall too! This will be a bigger tourist attraction up there than Niagara Falls and Mount Rushmore put together. And then, let me remind you that many of them drug dealers and rapists and terrorists have boats too. So, The Greatest Wall of T-RUMP will extend into both oceans and the Gulf of Mexico as well. And here’s the great thing about that! We are going to build the wall on the American side of the oil rigs, so when they break none of that mess reaches US shores! No more oil spills! And not only that! Listen to this! Know what else we won’t have problems with once I build this wall in the oceans? Sharks! Why The Greatest Wall of T-RUMP will even stop hurricanes and typhoons! This country is going to be the greatest paradise God ever created… with a little help from yours truly, of course.

T-RUMP: I know it does. Let me just say this: this thing is just the thing that will make America great again. I want all your readers to know one final thing: I can’t wait to get started. Now, if you’ll excuse me I got some more criminals to catch. 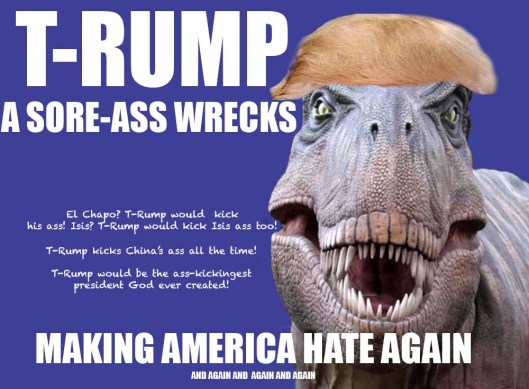 And with that… the once and future President was off and running and Making America Great Again.

16 thoughts on “The Greatest Wall of T-RUMP”