I caught about fifteen minutes of the end of a television program. Perhaps it was called The Amazing Race. Contestants were racing around global point to global point peforming tasks of little significance to the game in order to receive instructions to the next global point and at this point they rushed to a Chinese city to dress up in glamorous ancientized attire and retrieve a fish icon by jumping from a height into the gloomy aerated pool of a huge water extravaganza.

My next dream brought me what I suppose was my own version of the water extravaganza Kyoto style. The Chinese one appeared more like a casino show, and mine was I think a logical extension of the existing shrine and temple show of Kyoto and is probably only interesting to me. It involved a visit to a vista of gardens and little tea houses that were inhabited by lovely little people dressed as lords and ladies, a foot bathe in a carp pond, all documented by a famed poet by diagrams on a paper fan for use in a kind of fortune telling. 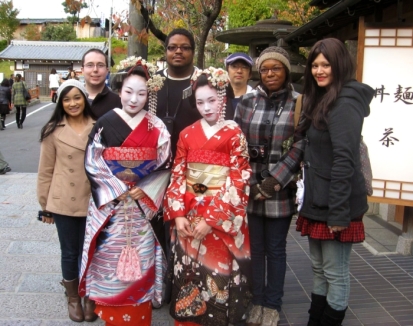 I explain that only because I am thinking that we appear to be ushering into our public life an even greater level of Make Believe historicalization. People today can buy much more fantasy extravaganza entertainment for themselves than they used to: entertainment that glorifies poverty and makes wealth look ordinary.

One of the four contestant teams found themselves unable to retrieve a fish icon and I suspect it may have been a problem of contact lenses and grubby pools. Make Believeness may turn out to be what Europe is, was, we may adjust our nations system sideways into something very new.