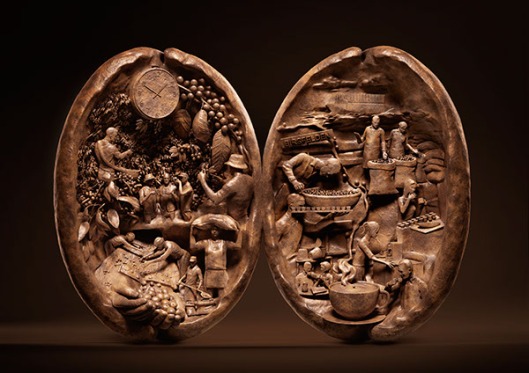 Inspired by the search for the world’s rarest coffee bean, gourmand and seasoned traveller Gregor Stronach embarks on an epic journey to Africa.

Travellers the world over move from place to place for a variety of reasons, each as personal as the documentation they require to return home.

For some, it’s simply the love of the journey. For others, the destination is the real prize. And then there are people like me, who travel in search of something truly unique – a rare gem that sparkles somewhere on our planet, just waiting to be unearthed.

I take my inspiration to travel from often unlikely sources – and this particular adventure is no different: a simple conversation, overheard at my favourite coffee shop, Flicking the Bean, on Newtown’s bustling King Street, in the inner-west of Sydney.

Two young men – both with beards so mighty and impressive that I was quietly sure they could house a family of four and give shelter from a hurricane – were doing what true lovers of coffee often do. They were discussing the latest beans and brews that they had tried – and were indulging, I must admit, in more than a little bit of showboating and one-upmanship.

My interest was piqued when one of the young men proclaimed that he had tried what many consider to be the Holy Grail of coffee – a bean so rare and rich, that only the very best baristas in the world are ever allowed to attempt to extract its heady crema. A trump card had been played.

“But it’s impossible…” – which sounded less like a declaration of fact, and more like a challenge to my ears.

Intrigued, I took my stolen advice and decided to make a beeline for the most populous nation in Africa, in search of a coffee bean so rare, not even the government of Nigeria will admit that it exists.

I rang my editor, who was delighted to have found someone prepared to travel to Nigeria. While mumbling something very quietly about it becoming “somewhat dangerous” over the past 12 months, he casually mentioned that a contact at Emirates had been in touch.

The Emirates route from Sydney to Lagos was had apparently dipped somewhat in popularity, and Emirates had offered the chance for a journalist to fly in its luxuriously appointed First Class section. I seized the opportunity, of course.

I’d often wondered what it would be like to fly somewhere while lying down, while being waited on hand and foot by a bevvy of unobtainable dusky-skinned beauties. This was the perfect opportunity to find out.

I had been conditioned as to my expectations about the Emirates “world-leading” First Class travel experience by a couple of things. Firstly, there was the media blitz that seemed to have seen every man and his dog that dared to call themselves a “travel writer” invited on board to savour the splendour of their own personal cabin space, while they flew from Sydney to Abu Dhabi, before being put on the next available Qantas plane (economy class) to fly home again.

I, however, had missed out on this apparent bonanza the first time around, and so I was very pleased to have received this chance to completely independently and impartially review this rare and luxurious experience.

The second, and perhaps most intriguing, revelation about what I was to experience once on board arrived via the utterly enormous, and frankly quite confronting, 15-metre billboard inside the overseas passenger terminal at Sydney’s Kingsford Smith airport.

It features the reclining, silk-clad figure of Australia’s Own Nicole Kidman. The photography is clearly meant to suggest that Ms Kidman is cocooned aboard an Emirates jet in a nest of almost intolerable comfort and relaxation, dreaming happily away about the years she spent married to Tom Cruise.

However, the visual effect looks rather more like she has been kidnapped, drugged and unceremoniously left in the cargo space of a well-appointed courier’s van – destination, and destiny, both highly uncertain in nature.

I made my way through to the ultra-exclusive Emirates lounge, where cool jazz wafted gently into the room, and pin-striped men in pin-striped suits sat quietly whispering to their wives and / or mistresses, glancing around quietly to make sure that they were being noticed by every other pin-striped man in the room. I was, it seemed, the only person travelling alone.

There was no overly-loud announcement that our flight was being called. Instead, eye contact was made by a young woman upon whose head was perched a teeny-tiny fez – the kind an organ grinder’s monkey might have worn on the streets of Little Italy in 1880s New York. With the slightest of nods, I was informed that it was time to board the craft.

Once aboard the Airbus A380-800, one of 59 currently flying for Emirates to 35 destinations around the globe, I was immediately struck by the almost-disquieting levels of deference paid by the flight attendants to the passengers. Any and all requests are met with a charming half-smile, a nod and an assurance – spoken, or otherwise – that no request is too difficult, or will be turned down. Indeed, one might be fooled into believing that this is how life is meant to be. And, for those of us for whom this level of luxury is only just out of reach, it would be an easy trap to fall into.

If I’ve learned anything by travelling the world, it is this: Trimmings are just that.. and a lily, once gilded, is still just a flower.

4 thoughts on “Barista Wanted… but I’ll settle for a Lawyer.”