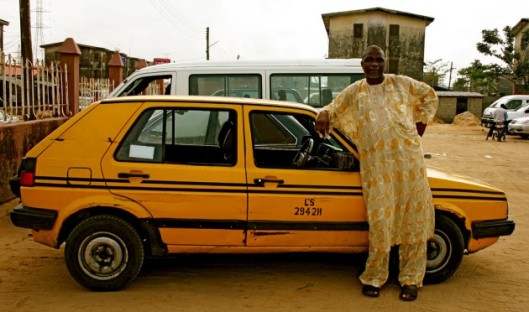 Gregor, roasted, grounds to a halt

Leaving Lagos is like Leaving Las Vegas – interminably long, difficult to experience and by about 20 minutes in, one is left with a profound desire to kill Nicholas Cage and get everything over and done with, but without the sustained horror of watching Elisbath Shue be brutally assaulted via the “tradesman’s entrance” by a college football player, whose name was probably Chad.

But once we had hit the open road, I felt that I could relax, and begin some more background research with Ajagbe’s assistance. I began by asking about Nigeria’s ongoing passion for coffee.

“Oh, yes sir! Nigerians are very much learning to love coffee!” he enthused. “Two entrepreneurs from Lagos have started their own coffee chain, and according to their press releases, they will soon be the Starbucks of Africa! I have been to one of their three shops in Lagos. Neo Café is the best coffee in the whole of Africa!”

“Except for Kenya… their coffee is amazing.”

I interrupted his misguided tirade.

“No, no… I want to know about the rich traditional heritage that Nigeria has for growing coffee beans,” I demanded. “I have travelled all this way to find the most exclusive coffee bean in the world, and I want to know its history.”

My heart sank. Quickly revisiting my research on my laptop, I double-checked the Wikipedia links that I had bookmarked for offline viewing. Sure enough, the UN’s assertions about Nigeria turned out to be entirely untrue.

Nigeria is listed as only the 40th-largest coffee-producing nation in the world. And, upon that Wikipedia page, the link that should lead to the entry outlining “Coffee Production in Nigeria” is an ominous red – and the URL confirms that “The Page Does Not Exist.”

Panic set in. Had I been hoodwinked? Sent on a wild goose chase by the anonymous bearded hipsters that haunt my favourite café, Flicking the Bean, which is centrally located on the bustling inner-city shopping, dining and entertainment precinct of Newtown and offers an extensive all-day breakfast menu coupled with friendly service and very reasonable prices, considering all of their food is organic and they don’t charge extra for gluten free?

Worse still, was I currently in a vehicle, headed for the far-flung Sambisa Forest, in search of a coffee plantation that was even more of a phantom than my ability to pay for my incredibly luxurious flight from Sydney to Lagos in the First Class cabin of Emirates airlines, where no request is too difficult for the staff and the dining options make a prolonged and steadfast mockery of every stand-up comedy gag about airline food ever made by the likes of Jerry Seinfeld, who could afford to fly First Class on Emirates but doesn’t because it would completely ruin his ‘what is the ‘dee-yul’… with the peanuts… on airplanes’ jokes?

I needed to think. And I think best when I am asleep – so I took a leaf from every other car-bound person in Nigeria, pretended to be stuck in traffic, closed my eyes and drifted off…

When I opened my eyes, I was greeted by the grinning visage of Godwin, who chirpily announced that we had arrived in Sambisa Forest, where – he assured me – we would find the only viable coffee plantation in Nigeria.

It was owned, Ajagbe went on to explain, by a local warlord whose affiliation with a local jihadist group was a source of only minor concern. This region was “comparatively safe”, Ajagbe said.

“Okay… compared to… say… trying to survive on the surface of Venus, this region is considered ‘safe’,” he said.

The Russians have sent more than a dozen probes to the surface of Venus. None of them lasted more than an hour in temperatures that hover around 426 degrees Celsius, coupled with an atmospheric pressure that beats even the depths of the Mariana Trench and incessant showers of almost pure sulphuric acid.

Needless to say, I wasn’t convinced – but I was impressed by Ajagbe’s knowledge of the nearest planet in the solar system to earth. The infomercials I’ve seen must be working – and eating bibles must actually help people learn.

Godwin drove us to our accommodation, a former hunting lodge on the boundary of what is now the Chad Basin National Park, a former safari venue for wealthy Americans with more bullets than empathy, and people called Chad who like to hurt things that they will never, ever have a chance to understand, because they are all Neanderthals with nothing but sexual conquest at any cost on their mind.

These days, according to the literature I found in the reception area of the lodge, the hunting of animals has stopped entirely, and “the only kind of shooting allowed here is with a camera!”

The unmistakable crackle of small arms fire in the near-distance belied that particular claim – and each burst of fire was greeted with the now-familiar cry of “Happy Thursday!”, accompanied by the kind of increasingly guilty looks usually worn by those who know that they’re lying, know that they’ve been found out, but have decided to persist with the ruse on the off chance that the person they are lying to might have a stroke and forget everything that has happened in the past 14 days.

The lodge was, to be kind, a complete shambles. We were met at what passed for a reception area by a surly chap in military greens, brandishing a Soviet-era AK-47 – arguably the most menacing welcome to a hotel that I had received since I attempted to check in at the Rynek Główny hotel in Krakow without offering the requisite bottle of imported vodka to grease the wheels of arranging a room.

For a barely sub-Saharan area, this reception was confusingly frosty.

I found my room, let myself in and was horrified at the state of it. The bedclothes were filthy, and bundled at the foot of the bed, where they had clearly been left by the previous tenant – who, if I were a gambling man, I would bet had less than 24 hours to meet with a doctor before what could only be described as “a catastrophic failure of the bowel” occurred and he shat himself to death.

I marched back to reception, and demanded to know why my room was in such a state.

“The maids… they have all been taken,” was the reply.

“Boko Haram, and to Paradise,” came the response.

“That’s all fine and dandy… but I’ve done my homework on this region,” I shouted. “It was only a few weeks ago that local Governor Kashim Shettima had pledged millions of Nigerian Naira to help fight chronic unemployment. There must be people lined up for miles to come and work here. Where are they?”

“We cannot employ them because they do not have the required level of education,” I was told.

“Again, I’ve done my research… and that makes no sense!” I exclaimed. “Right now, the student to teacher ratio around here is better than most of the developed world! How can education be so poor, when that is the case?”

“… It’s because Boko Haram have abducted all of the students as well.”

Momentarily flummoxed, I bellowed until Godwin arrived. I suggested quite forcefully that it might be time for me to get to this coffee plantation, get my story, and move on. Nigeria, I told Godwin’s crestfallen face, was becoming my own personal Fall of Saigon. I wanted to take what was obviously an ignominious defeat, portray it as a victory, and fly home as soon as humanly possible – just like the American army in 1975.

We needed to move, and move fast. Godwin, myself and the strangely increasingly-distant Ajagbe got back into the car, and drove for an hour into the wilds of Borno State, the most north-eastern province of Nigeria. The principle exports of Borno State are – for those of you playing Trivial Pursuit while reading this story – rubber, and cocoa. Coffee, it would appear, is a long way down the list. In fact, it is so far down the list, that it doesn’t actually appear on the list – a list which includes words like “sorghum” and “yams”, which are clearly made up by someone who enjoys editing Wikipedia pages when they are drunk and lonely.

So you can imagine my surprise when we stopped in a clearing beside an aluminium garden shed, guarded by four young men who fairly bristled with weaponry. A sign above the aluminium shed clearly read “Simbisa Coffee Concern, Est. 1978” – and there was even a picture of a cappuccino.