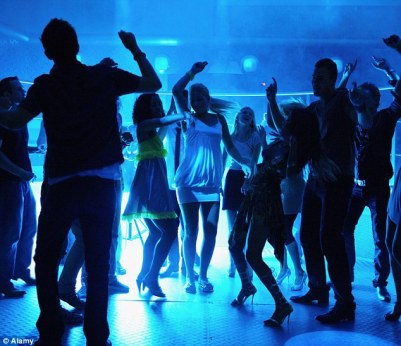 Every one was in and the bar was jumping. 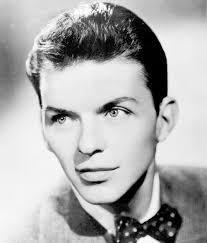 A young Frank Sinatra was finding his way to the  microphone. He crooned into it. O-o-o-yes. He stopped. Every one was looking. He was talking to a young woman in a pink check gingham shirt and blue jeans. The young woman leaned in towards the microphone. She was wearing a pretty pair of white sandals she lifted one by one – and langurous – behind her. She was laughing. Her mouth opened in the shape of a pretty bow. Her heart stretched and purred on her sleeve. Young Frank was flirting. O-o-o-yes.

Granny screeched. That was normal.

Young Frank had the floor. The microphone volume was tuned and his voice amplified was sexy, sweet in a lower register. The young woman was now reaching forward to touch a button of his shirt with one long pretty-in-hot-pink finger nail and another on the next and next marching glossy nails up his shirt front to his chin where she rested one. She titillated the skin under his bottom lip with the other. O-o-o-yes.

Granny screeched. Nobody understood her. She nodded her head in agreeable assent with herself. Circles of gypsy gold glissandoed and shimmered suspended from her ear lobes. She abruptly pushed herself with her forearms raised like a bucket of a front end loader back through the jostling crowd gathered at the bar and disappeared. Granny swathed across one shoulder to thigh high in a faux striped animal skin tunic. Granny in petite fur boots gone in the melee. Granny who waved an arm of metal bracelets in the air like a submarine periscope when she wanted to be found.

The juke box and the acoustics of the room bent the sound of a newly spinning disk. Impossible to tell who it was until Acacia shouted loud enough followed by Fern, “LADY GAGA LADY GAGA”. Every one started shouting, “LADY GAGA LADY GAGA”. The door of the Nathan Rees Memorial Ballroom  across from the head of the stairs to the second level opened and shut and the distorted sound of the juke box mingled with the B52s rocking the ballroom. SHOUT SHOUT SHOUT SHOUT.

Everybody was going for it !

The nurses all thought it was the best night they’d at least had in a while. They were all shouting. As loud as they wanted at a table at the eastern end of the bar.

“Shhh, DON’T repeat that here. Somebody might hear. Every one will guess who it was.”

“We want to book the ballroom. We  got a Double Sister Comedy Act called M ‘n’ M ‘n Emm,” Big M and Mark shouted. To no-one. Just shouting. “We’ll, us, we’ll be singing and Emmjay can play the ukelele keep us in choon.”

Foodge had joined them. They had someone to tell.

“We want to book the ballroon, We got a Double Sister Comedy Act called M ‘n’ M ‘n’ Emm,” they shouted at Foodge.”Want to get M ‘n’ M ‘n’ Emm down on the books and Emmjay c…”

“Heard the rest,:” Foodge shouted, “He can plague the ukulele to keep the bus running. Is that a thing, it’s called a euphemism? I’ve not heard it before.”

“Yeah, yeah, yeah, that’s right,” the new act of M ‘n’ M ‘n’ Emm agreed excitedly, way people do when they have not fully understood what someone says or is talking about in a crowded bar where the build up of noise is a cacophony no different from a flock of fighting and scrapping galahs and magpies going home overhead together to roost at the end of a hot day.

Foodge sucked on a straw he took out of a shirt pocket. He inserted it into the lid of a take-away container and sucked again. He drew in a mouthful of liquid.”

‘Milo’ was a word they had all mastered lip reading.

They were staying in character. Big M and Mark hoped Emmjay had his ukelele with him. Emmjay did not know yet of the turn of history’s freewheeling wheel. Better tell him, the M ‘n’n M part of their Double comedy act looked at each other. No need for words. Their first gig was later in the evening in the ballroom when the 52s fnished. At that moment as if to remind them the door opened and closed on the ballroom. It was frenetic. SHOUT SHOUT SHOUT SHOUT.

Foodge yelled at Emmjay, “Have you been doing what you can do … you know … to keep the bus running?”

I need to finish the story.

“Yeah, yeah, yeah,” Emmjay nodded his head vigorously and smiling broadly at his collection of trusted and loved friends and Foodge, his charge, shouting and yelling with them at the table in the corner. He repeated, nodding his head, “Yeah, yeah, yeah.” Hadn’t a clue.

Merv was sitting behind the bar in the Sports Bar, the next room, in his rocking chair, his knees crook and keeping an eye on The Bish. The Bish was running a book stuffing notes in bundles into a canvas bag under the counter fast as he could go. Punters were handing notes to the Bish in wads secured with rubber bands.

Young Frank Sinatra who had sung a bracket and vacated the stage area that had been temporarily made for him by pushing some tables aside ran out of the crowd at the bar. His hand held the hand of the woman he loved following behind him half-running and her smiling bow of a mouth was freshly painted with a hint of Delicious Red lined with Strawberry lipstick. Her white sandals picked up a shifting spackle of lights on a string, a bunch of flickering Valentine Day heart ‘candles’ arranged in a love heart over the microphone. O-o-o-yes. Foodge choked up with tears of sentiment in his eyes when Young Frank Sinatra, his voice like honeydew and melons, took advantage of the hush. Young Frank had leaned into the microphone. He purred, “I love my Dearie.”

Turned out later, properly introduced Young Frank said Deirdre. Foodge’s eyes spilled over at Dearie, nevertheless. A few eyes were wet with sentiment. Merv was rocking himself, furiously, trying to stand up out of his rocker by propelling himself up and out of its confine. He slammed into the Bish. When his feet found the floor he had tottered forward on the impulse of a moment and helpless it looked motivation. He grasped onto the Bish’s collar Merv could only see in the illumination of a tiny flicker of light nobody could say later where from.

The bar had plunged into darkness.The only sound in the quiet was the momentary gurgle of air as the Bish succumbed to the throttle-like twist Merv’s grip on the Bish’s clerical collar effected.

The patrons and staff, the workers, pensioners, real and make believe nurses, the writers, poets, painters and decorators, public service officers and counter clerks, IT engineers, architects, lawyers, the unemployed and the Hells Angles looking in through the door onto the car park, the ecclesticals, the ecumenicals, everybody, the thickest of bricks and the brightest knew power cut.

The Ballroom had fallen victim of the power cut as well. The entrance door into it at the head of the stairs had opened because a voice could be heard advising patrons to file out and in an orderly manner descend the stairs. TURN ON YOUR MOBILE PHONES.

A stream of moving light illuminated the profiles of patrons walking out of the Nathan Rees Memorial Ballroom door and down the stair case pooled in mobile phone light. The tinkle of messages being received and of the different soundscapes being activated was profound. The procession was in sharp contrast to the cathedral of dark places around it and pierced shadows overhead. The ballroom was at capacity. The floor below at the bottom of the stairs was an ocean of mobile phones like fireflies as its inhabitants searched around themselves to find handbags of friends they minded and their own and manbags as well as denim and safari jackets. Each other was impossible in the glare of 500 skittish phones.

Granny screeched, EVERY ONE IN THE FRONT BAR AND SPORTS BAR. STAND STILL. QUIET.

And we’ll leave them to make what they may of their timing, and the main participants, their rakings and their takings, humanity, gullibility until we meet again. We’ll find out who flogged the canvas tote bag out of the grip of the long fingers of the Bish as he choked on Merv’s stranglehold or not long after. Eh.

Some of the life story of Foodge.

Something important is laid down about the Continuity Department

16 thoughts on “Episode 86: Everybody Loves A Night On The Turps”