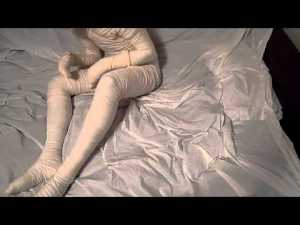 Microscopic surgery for sure…

Merv had endured a torrid time with his ‘blown out’ knee. He’d been to the GP, orthopaedic surgeon, MRI, and then physio. He’d hoped that a quick arthroscopy of the knee would fix it, but, no, now it’s all knee brace and physio exercises. Maybe he’d have an arthroscopy when all this fails, he pondered. Just then the phone rang. “Hello Mr Merv.”

“Ah, Foodge, we’re all wondering ‘ow you an’ O’Way were getting’ on in the Old Dart?” Merv bent down to adjust the Velcro on his knee brace.

“Well, it’s all plain sailing over here. I doubt they’ve ever had a paedo here in England, well, except Jimmy Saville and Rolf Harris, and Eric Gill, but he was a famous artist so doesn’t count.” Foodge enthused. “How’s the knee?”

“Painful and tedious. Can’t run or lift. Have to wear a kneebrace and do stupid feckin’

I see the problem with your knee…

“It’s O’Way here. Can’t talk. Too much going on. Have managed to infiltrate the tykes. They’re a tight bunch. Can’t get a word out of them. Foodge has joined a Gentleman’s Club. He’s hopeless. He’s lapped up all of the usual guff because they have free Scotch and cigars for new members. I’ll pop him back on.”

“Did you hear that? Free Scotch and cigars. How could these folk be harbouring paedos?” Foodge took a drag on a stogie.

“Mate, you don’t think they’re trying to bribe you with cheap booze and tobacco?” Merv took a sip of South Sea Islands Scotch (it seemed to enhance the pain killers).

“Merv, O’Way here, Foodge has no idea of what he’s doing. Way out of his depth.The

only thing protecting him is his complete ignorance and ineptitude. I think I’m pretty safe, because I haven’t really managed to get anywhere, but Foodge wanders around talking about paedos at the top of his voice. I’m not sure, but I think we’ve been followed a couple of times.” O’Way was nervously twitching the Venetians. “We either need to withdraw or get backup.”

“There’s no-one here we can send.” Merv was secretly pleased that his knee prevented him from helping. “Hey, what about me nephew Wes? He’s built like a brick shit-house, he can fight like a threshing machine, and hasn’t even had a cameo in an episode for years.”

O’Way ruminated for a few minutes. “Yes, Wes, I met him once. Unforgettable. He’s a nurse, isn’t he?”

“Yes, male nurse, can drive just about any vehicle. Used to work in an abattoir, so he’s good with a knife. He’s been to Bali, once, so he’s an international traveller.”

“He sounds like he possesses useful skills, plus we can get him to snoop around some of these London hospitals. Merv, so you feel comfortable with recruitment? Usual deal, Leer jet from Sydney to London. Five thousand pounds a week, plus board. We also provide a very generous hosiery allowance!”