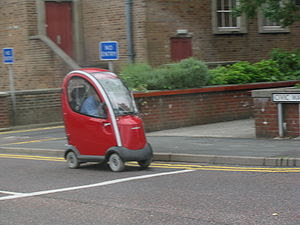 With the most immediately important repairs to the city of ‘El Dorado’ completed I began to resent my inability to do much in the house or garden and being thus obliged by circumstances to hire others to do what once I could have happily done myself. But worse still was the inability to get ‘out and about’ due to the limits of my ability to walk and stand, which has made doing my shopping my one major fortnightly outing and one which usually leaves me stiff as a board with backache as well as extra-sore feet.

Then I had a revelation, as I opened the gates to ‘El Dorado’ to get my car in (no remote-control on these ancient iron gates…) when a passing dalek stopped and, instead of uttering the expected ‘EXTERMINATE!’ laughed to see me limping around opening gates to get the car in and said, “Ya orta get wunna theez mate!”

In exchanging emails with my old mate, Phil Rebe in Perth, I decided that such a mobility scooter was going to be needed if I were to be able to negotiate the airport and wander around Perth much. I found daleks (as I prefer to call ‘em instead of ‘gophers’… I mean, who wants to be a ‘gopher’? BTDT! But a dalek, now that could be fun…) can be taken on trains and even buses… though I haven’t been quite adventurous enough to try the buses… yet.

I can’t describe how much more freedom this little scooter has given me; I now go out for a ‘walk’ (well… perambulation, I suppose would be more accurate!) almost every day and can get to Elizabeth and/or Munno Para shopping centers easily; the large bag on a rack behind the seat carries quite a lot of groceries.

But to really show how much my mobility scooter spells ‘freedom’ to me, I can say it got me to Perth and back in good order and charge to spare! (Of course, the trains and planes helped a lot, too!) 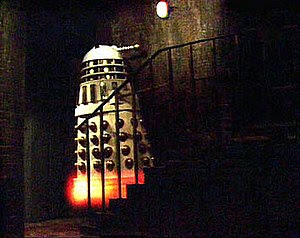 An Imperial Dalek flies up a flight of stairs (from Remembrance of the Daleks) (Photo credit: Wikipedia)

I call them ‘Daleks’ because I can just imagine how the notorious Daleks evolved from ‘wheelies’ like us (as the air stewardesses like to call us…) out of an extremely useful, but also extremely vulnerable, form of transport: First the armored exterior and bumper is added; then the weapon for self-defense (initially, at least) and the sucker is a good way to scab free rides from passing cars…

The stewardess who was pushing me through the airport enjoyed my theory, anyway. “You sound like you have it all figured out…” Charming girl… And I must say a huge THANK YOU to VIRGIN AIRLINES and their staff for all the help and care they took with me and my dalek… which are allowed to ride for no extra charge as ‘checked baggage‘.

I’ll write more about the actual trip and all the fun I had in Perth in a day or two; maybe even submit it to the Pigs’ Arms Bumper Xmas Edition, as editor Mike has requested a contribution from yours truly. I’ll see what I can do Mike!

Anyway, that’s all for now… Much more later!