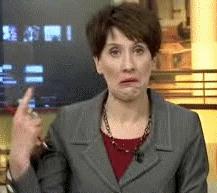 I think it’s time that you and I stopped beating around the bush and that we both recognised my deep and abiding passion for a wonderful librarian-style woman, only slightly my senior.  And how could I possibly be anything but head over heels when I rush to switch on the morning alternative television massively relieved to discover  that Aunty has not replaced you with Scarlett Johansson – as was mooted in the Pig’s Arms men’s convenience last weekend ?

Now, I know that some men (Manne for example and I use the term loosely) has said that he prefers to get up to a woman who looks slightly less like she’s slept in her suit in the park and been dragged backwards through a hedge after a rough night on the tiles, but not me.  I adore those 40 shades of verdant hessian couture draped resplendently over – can I say boldly – a woman’s bosom ?  I’m sure that with so much of the morning news being about combat, that  I should expect a woman to win a man’s heart through hand to hand combat with another woman.  And I’m not for a minute suggesting that Jennifer Kyte, that winsome former 80’s siren could ever give you the slightest tussle, let alone win hands down.  Not even mentioning Jana Wendt.

I think we have to face the reality that going to air before the wardrobe and make-up people have returned from their go-slow protest against Mark Scott’s latest round of cuts, is a pretty tough gig.  But it’s definitely one that you bring off with a certain je ne sais quoi.

I remember with a great sigh the day you left radio.  It was me sighing, not your lovely warm nasal symphonic tones.  But I was richly rewarded when there, seated in dignified repose next to Joe Gilanese was not some minor goddess like Katherine Zeta Jones, but YOU !  Looking for all the world that you were still on radio.  Still talking to me.  Only me.  And certainly not the autocue.

Can I say that I am so smitten that I find it nearly impossible to tear myself away from the small digital Samsung (free with the purchase of a largish LED television of the same make).  I sit there for hours in my singlet and socks despite the deafening call of the bathroom, the minor nuisance of working for a living and the poison pen letters from the little old lady – and her cat – across the road – who even as we speak have their noses pressed to the front window in anticipation of a glimpse of chest carpet.

Virginia, I know that Joe has that coquettish Italian charm.  I know that he has a conmanding grasp of the NEWS, but if you are willing to expand your horizons and take a fresh listen to one of your old radio fans, I know you wont be disappointed.  Return my affection and see what rising up the charts with a bullet really means.