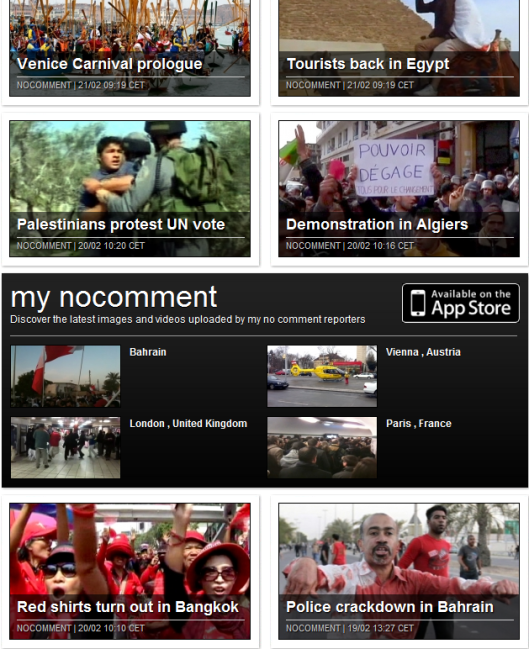 I posted a comment over at the Crikey video of the day, praising the work of ordinary folks who filmed the Christchurch disaster live from their mobile phones and posted faster on Youtube than any of the mainstream media.

More than that, there was no offensive bullshit halfwit news reportage a la ABC 24 hours.  There were the images – use your own mind to assess what you see.  No explanation needed.  Not helpful for some talking head to say how awful it all was.

“Lambkins” added a useful tip – that Euronews has a comparable segment called “no comment”.

So I had a peep – for example – surprised to hear what’s happening in Egypt as far as the important ancient site tourism.  I was wondering if I might ever get to see the pyramids and Valley of the Kings – and catch up with both the Emmlets who have been there independently….

“At euronews we believe in the intelligence of our viewers and we think that the mission of a news channel is to deliver facts without any opinion or bias, so that the viewers can make their own opinion on world events.

We also think that sometimes images need no explanation or commentary, which is why we created No Comment and now No Comment TV: to show the world from a different angle…”