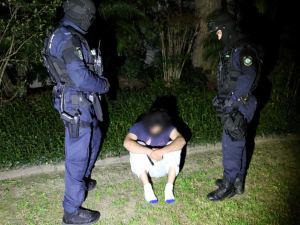 It was tense at the Pig’s Arms this week with the news that the AFP and NSW coppers had saved one or two of our random population from suffering the fate of those unfortunate and now deceased westerners in the wrong place at the wrong time – anywhere in the Middle East.

I’m referring to the news coming down on the electric television in the front bar of the pub – about the pre-dawn raid on 25 western suburbs Sydney homes – and some in Brisbane looking for weapons, explosives and computers and phones laden with incriminating evidence of terrorist malfeasance plotting.

RIGHT HERE in the backyard of the pub.

There it was in graphic detail and I might add, beautifully choreographed and shot – dudes with cheap tracky dacks and beards with their hands cable-tied behind them, sitting on the nature strip with reaaallly beefy storm-trooper cops standing over them in the pre-dawn dark. Lots of those pics. Man, how lucky are we being protected by these heroes!

Amazing how the reporters were there on the job to get the action ! Helicopters with search lights !

But we did get a glimpse of a longish object under a cloth that COULD have been a sword.

And there’s an allegation that there was a phone call from some bearded psychopath supporting the Islamic State to target arrestee #1 instructing him to behead some random bystander and drape them with the IS flag in some really public place. Somewhere.

And so the media went into hyperdrive pedalling rumours about domestic terrorism. Not much actual evidence mind you, but since our illustrious illustrated illusionist leader was busy despatching troops back to Iraq – a nation to which we just recently cut all economic aid – and since we have had to tighten our belts (pay attention poor, sick and disadvantaged people, mentally ill, victims of domestic violence, unemployed people and students) – I guess Tony had to beat up some excuse for doing what America told us to do – even if we clearly cannot afford it.

I mean – what does a squadron of fighter planes and a few thousand troops cost per day compared to keeping open a few women’s shelters and schools for troubled youth ?  Gotta be much cheaper to fund sham military actions than look after our own, doesn’t it ?

I don’t know about you, friends of the Pig’s Arms, but I have a strong feeling of being sold a pile of poo tickets by the government and the media. And I’m ashamed at how keenly our media wants to whip up racism and antipathy towards our Muslim brothers and sisters.

The fact that (on the pretext that the confiscated computers and phones have so much data that it will take time to go through it all) the Australian Government had to trot out Howard era draconian anti-terrorist laws (unlimited detention without charge) to be able to hold the alleged criminals in custody indefinitely speaks volumes.

Here, friends we see it before our own eyes – Tony Abbott’s own ‘children overboard’ moment.

This government is bad enough without creating wild and irrational fear and turning Australia into a dyed in the wool police state. Check out the pictures. They say it all.

Which is in stark contrast with the Labor party who just stand there, looking concerned in case some of the mad bullshit might be remotely true – and saying nothing.

But as far as the Labor Party is concerned, they might as well pack up their tent and abandon the next election, because when the mindless people who voted these scum in have a choice between Bill Shorten and Australia’s answer to Vlad Putin,  I’m pretty sure we can all guess who they think will best protect them.

So, show us the evidence, politicians and cops – some weapons of mass destruction or something, you lying bastards. Hurry up and manufacture some at least.

Or shut the fuck up, let the arrested people go and then you can just piss off.

10 thoughts on “Beheading the Labor Party”