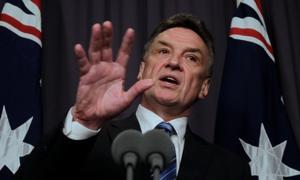 In even later breaking news than the last time the Pig’s Arms broke news, We can reveal now that Craig Emerson, the Member for Skyhooks will throw his hat into the ring for the position of Australian Prime Minister.

I can bust all the moves a great national leader and a towering presence on the world stage should be able to bust, and I can rock with the best of them.

Unaware that Craig was not actually a member of the Libnats, and in fact was an ALP member, Libnat stalwart Peta Incrediblin was quoted as saying that “I can work with this man – he’s got a million dollar riff!”.

Mr Emerson was available for comment, but nobody could be bothered to ask him for one. If they had asked him, he was going to point out how good he looks in front of the Australian flag and remind people that he was woman friendly – unlike other PMs known for their miso generosity. In his press release he had cool stuff like “Break it down, chillen” and “Rock my cabinet, straight to the bar”.

4 thoughts on “Craig Emerson to Challenge for PM”