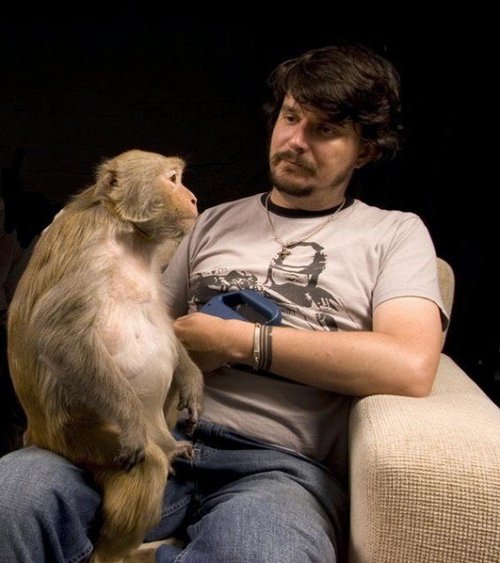 Why do men have nipples?Men have nipples for aesthetic purposes. They mainly exist to provide punctuation for the pectoral muscles, and occasionally to make fat men look like hairy women. They also provide an excellent place to attach electrodes during routine questioning of African American suspects in southern police stations.Without nipples, a man would look like a mannequin, and the less men look like department store dummies, the better… because if we start to take nipples off men, eventually there will be a worldwide glut of nipples on the international market, and the internet pornography industry would die.Dear Gregor
Why does a grown man who rides motorcycles own an overly cute cat? He is either secretly a very soft individual, with a carefully constructed façade of seriousness tempered with a blistering sense of humour, or he might be gay. Take your pick – although I’m leaning towards the first explanation myself.Dear Gregor
How do I get the hot mamas to like me? I would start by putting pants on… you’d be amazed at how quickly your fortunes will turn around once you stop turning up places with your doodle hanging out.Dear Gregor
How did Tom Arnold end up connected with every movie featuring black people ever?Tom Arnold had himself declared black for tax purposes in 1992. To celebrate, Tom was awarded the publishing and distribution rights for every single film featuring black actors by Michael Jackson, who has been steadily divesting himself of assets since he was busted for playing ‘touchy touchy’ with some little children. Dear Gregor
Why do people look at me funny when I touch them? And can I touch you? A hard question… but I think it has something to do with the running sores on your face and limbs. My advice is to eat leafy green vegetables with every meal, and try to get out in the sun a little more. If that doesn’t clear it up, a gentle wash with a lanolin-based soap (preferably one that doesn’t contain glycerine) might help as well.Another thing to consider is the notion of asking people before you put your hand down the back of their trousers. The excuse that you are simply ‘looking for loose change that might have slipped down the crack in their ass’ won’t go down too well in court.Dear Gregor
If girls are made of sugar and spice and all things nice, how comes they taste of anchovies? Try purchasing salt-reduced humans for consumption. I’ve found that by reducing the amount of salt I eat with my humans, my blood pressure has dropped. Sure, salt-reduced humans may be a little more expensive, but given the alternatives – be it a life of heart trouble or having to shell out the big bucks for totally organic human meat – it’s a small price to pay.Dear Gregor
Why doesn’t my daddy love us anymore? Because you’ve been bad. That’s why he left you and mommy alone in the house. He hates you for ruining his life, by burdening him with a responsibility that his weak male ego was unable to bear. It’s also because you look a little too much like the postman.Dear Gregor
Which came first – the chicken or the egg?Well, it’s quite obvious that the chicken came first, because without an egg there would be no chickens. No, wait… it was the egg that came first, because without chickens there are no eggs. Shit. Umm. I think they arrived at the same time. Yes. Yes, that’s it… the answer to your question relies upon the order in which you unpack your groceries after a trip to the supermarket.Dear Gregor
I am a man, yet I struggle to maintain interest in sports. What’s wrong with me? Is there an operation I can have? Yes, there is. Try a lobotomy. Then you’ll find baseball the most interesting thing in the world.If you’ve got a question that you think Gregor might be able to answer, send your question stapled to an A$10 note and your editor will try to remember what the cash was for, but will probably drink it anyway.

This piece first appeared in Gregor’s head, then it moved out and lived at Rum & Mon key for a while until someone put it out on the nature strip for the Council Pick up