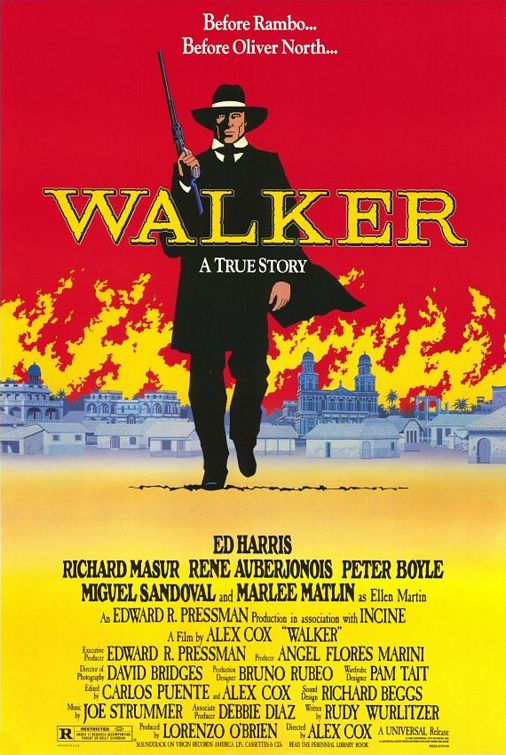 Playlist by Algernon, well not really it’s an album presentation

The music soundtrack was composed and arranged by Joe Strummer.

From Wikipedia a synopsis of the film. In 1853, soldier-of-fortune William Walker flees Mexico after a failed attempt to incite an armed insurrection. He is placed on trial by US officials, but wins acquittal on breaking the Neutrality Act. Walker believes in Manifest Destiny and has plans to marry and start a newspaper until his fiancée Ellen Martin dies of cholera. Financed by American multimillionaire Cornelius Vanderbilt, Walker and 60 mercenaries embark on a mission to overthrow the government of Nicaragua, to secure Vanderbilt’s rights over an overland shipping route between the Atlantic Ocean and the Pacific Ocean.

Walker and his corps score a bloody victory in Nicaragua and when the capital falls, Walker allows the President to stay in charge, but takes his mistress, Doña Yrena. With increasing disruption in the country, Walker orders the President shot and assumes the presidency for himself. From 1855 to 1857, his actions as president become increasingly manic and delusional, with Walker antagonizing his financial backer by revoking Vanderbilt’s license to the overland trade route.

Nicaragua and its neighbours unite to rid themselves of the unwelcome dictator, and they drive the despot out. Eventually, without the support of Vanderbilt or the US government, Walker’s further forays into Central America lead to his capture and execution. The film itself managed mostly negative reviews.

The soundtrack on the other hand wasn’t. Described as World music, it’s a mixture of folk, Latin and Americana and mostly acoustic. It also drew influence from reggae, calypso and Brazilian music as well as the music played in the bars and clubs where the filming took place.

The music is mostly instrumental and laid back.